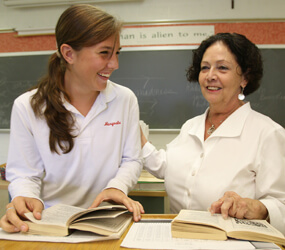 “If Shakespeare were alive, he’d be living in L.A.,” the 62-year-old Malone said. “He would be so thrilled to have these other ways to express his ideas. He’d probably short circuit because there are so many possibilities.”

Malone is no stranger to unconventional thinking. In fact, she’s a promoter of it.

For 30 accumulated years, Malone has been a staple at Maryvale Preparatory School in Brooklandville. Malone said she must shape her instruction around the young women who populate her literature classes each year.

During a late September Plays of Shakespeare class, Malone held a copy of Romeo and Juliet in her hand. She then explained a scene by referencing one of the Jonas Brothers.

The meshing of teen pop stars with literature’s standard-bearer is jarring.

“She makes it fun,” junior Katie Lentz said. “Most teachers just teach out of the book. She brings her life and experience into it.”

Growing up in West Baltimore, Malone was encouraged to read by her parents, Henry and Doris.

“My father made the biggest event of my childhood the night we went to get my library card,” Malone said. “He said, ‘You’ll never own anything that’s going to be more valuable to you.’ “

The passion for reading extended to her brother, Patrick, and sister, Dolly. Patrick once taught at Maryvale and Dolly teaches second grade.

Malone grew up with a strong command of religious vocabulary and noted a lingering love for the Latin Mass.

Malone arrived at Maryvale in 1971 after she graduated from the University of South Carolina with a master’s degree in English.

She assured Maryvale’s administration that she would only be at the school a year.

Eight years later, she left and pursued a master’s degree in psychology, with a counseling focus, from Loyola University Maryland.

“I believe that literature, carefully studied, leads to open-mindedness, compassion, joy and, yes, the love of God,” Malone said.

She bristles when a student says they did not like what they read. She encourages them to say, “I am not ready to appreciate it.”

Malone often tells her students to think about the meaning of things, because “the meaning is the truth.”

Not everything has been easy for Malone. She was diagnosed with arthritis 20 years ago and has had many related surgeries. She has used canes, walkers and a wheelchair to move about. On the day The Catholic Review visited, she walked the halls without assistance.

She is at home in the classroom, fostering a love of the written word.

“I consider myself more as a student,” Malone said, “than a teacher.”