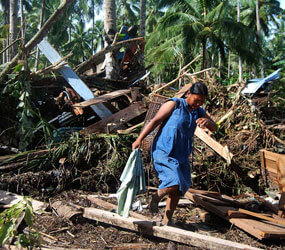 The disasters – a magnitude 7.7 undersea earthquake Oct. 25 that triggered a tsunami that swamped coastal villages in the remote Mentawai Islands off of the west coast of Sumatra and the eruption of a volcano on Java Oct. 26 – claimed at least 300 lives and displaced thousands of people.

Authorities reported the tsunami claimed 272 victims and that at least 400 people were missing after the tsunami sent 10-foot waves up to 2,000 feet inland.

“Entire villages were swept away,” Xaverian Father Silvano Zulian, a missionary priest who has lived in the Mentawai Islands for more than 30 years, told MISNA, the missionary news service. “The toll is destined to rise by the hour.”

High seas prevented aid from being sent from Sumatra until Oct. 27, when the government dispatched a cargo ship carrying workers, emergency supplies and temporary housing material to South Pegai, the southernmost and nearest island to the epicenter, MISNA reported.

Catholic Relief Services continued to assess the situation. Yenni Suryani, country manager for the agency, said an emergency response worker was traveling Oct. 27 to Padang to join Caritas Switzerland and Secours Catholique/Caritas France in a meeting with officials from the Padang Diocese.

“We set up soup kitchens at every community and an aid post in our parish compound,” Father Petrus Sadjiyana of Assumption of Mary Church told the Asian church news agency UCA News.

The eruption in central Java claimed at least 28 lives and forced thousands of people to flee despite the government’s advance warning to evacuate.

Suryani told Catholic News Service that people were reluctant to leave the area because they were tending their farms and feared abandoning their livelihood.