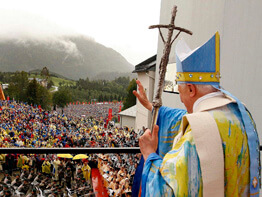 HEILIGENKREUZ, Austria – In a visit to one of the world’s oldest monasteries, Pope Benedict XVI underlined the power of prayer as a form of “service to the world.”
The pope, winding up a three-day visit to Austria Sept. 9, paid a call on the Cistercian Abbey of the Holy Cross, the oldest continuously active Cistercian monastery in the world.
He was given a rousing welcome, first by hundreds of local children gathered in the monastic courtyard, then by the monks and faithful assembled inside the stone medieval church.
Founded in 1135, the Heiligenkreuz monastic community brought Christianity to the region, and today it has about 80 monks. Its pontifical theological academy is thriving with more than 100 students.
Addressing the community, the pope spoke about St. Benedict, the founder of Western monasticism, and his central commands to his monks: first to pray, then to work.
All Christians pray, “or at least they should,” the pope said. But for monastic communities, prayer is a vocation, and praying the Liturgy of the Hours – certain prayers recited at fixed hours of the day – is the heart of monastic calling, he said.
The pope noted that praying the Liturgy of the Hours, or Divine Office, is a duty not only for monks, but for all religious, priests and clerics. He said he realized that reciting these prayers faithfully requires discipline and sometimes great effort, but said it returns many riches.
“Your primary service to this world must therefore be your prayer and your celebration of the Divine Office,” he said.
Prayer highlights the proper role of the modern monastery as a “place of spiritual power” in the world, not merely as a stronghold of culture or tradition, or even a simple business enterprise, the pope said.
“As a spiritual oasis, a monastery reminds today’s world of the most important and indeed the only decisive thing, that there is an ultimate reason why life is worth living: God and his unfathomable love,” he said.
The pope also paid tribute to the monastery’s theological academy, which recently acquired status as a pontifical academy and was named after Pope Benedict.
At the same time, the pope sounded a note of caution about modern theological schools, saying that theology can “lose the life-breath given by faith” in its desire to be recognized as a rigorously scientific discipline.
The important thing, he said, is to strike the correct balance between faith and reason.
Neglecting the intellectual dimension can give rise to “superficial piety nourished mostly by emotions and sentiments, which cannot be sustained over a lifetime,” he said.
But neglecting the spiritual dimension can create a cold and detached rationalism that can never lead to “an enthusiastic self-surrender to God,” he said.
The pope also spoke more generally about liturgy during his visit, telling the monks that the determining factor in all worship is “looking to God.”
“Whenever in our thinking we are only concerned about making the liturgy attractive, interesting and beautiful, the battle is already lost,” he said.
Liturgy must always have God as its specific subject, he said.
Before leaving the monastery, he blessed local parishioners from a balcony, then took time for a keepsake photo with all the monks. It was the first papal visit in the 872-year history of the Heiligenkreuz abbey.
The monastery was once proposed as the site of a hoped-for meeting between the late Pope John Paul II and Russian Orthodox Patriarch Alexy II of Moscow, but the meeting was scuttled after opposition by Orthodox bishops.