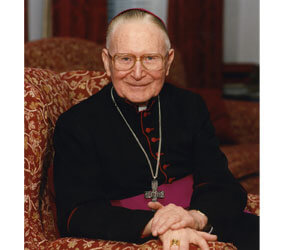 ARMAGH, Northern Ireland – Cardinal Cahal Daly, the former primate of all Ireland and an outspoken critic of paramilitary violence and poverty in Northern Ireland, was a man “ahead of his time,” his successor told mourners.

“As early as 1973 he was working with other Christian leaders in the search for peace,” Cardinal Sean Brady of Armagh told mourners at the Jan. 5 funeral at St. Patrick’s Cathedral. “A report which they prepared at that time set out principles for a nonviolent way forward for the divided communities of Northern Ireland. Today its language bears a remarkable similarity to that of political agreements we have now.”

Cardinal Brady said his predecessor remained adamant that “justice, mutual respect and purely peaceful means were the only way forward. It was a source of considerable satisfaction for him later to see politicians take courageous risks for peace. As he would often pray from the psalms, ‘Mercy and faithfulness have met, justice and peace have embraced.’

“Our task today is to continue along the path of mercy and to tackle all remnants of sectarianism in our midst,” he said.

In a telegram released Jan. 2, Pope Benedict XVI recalled the cardinal’s “long years of devoted pastoral service to the church” and expressed gratitude for his “sustained efforts in the promotion of justice and peace in Northern Ireland.”

Cardinal Daly was best remembered for his contribution to ecumenical relations at a time when sectarian violence increased in Northern Ireland.

As the former bishop of Down and Connor – the Northern Ireland diocese that includes the province’s main city of Belfast – he witnessed firsthand the bloodshed waged by the Irish Republican Army.

At his installation as archbishop of Armagh and primate of Ireland in 1990, he called on the IRA to end its strategy of terror and urged a government-sponsored “new deal” to aid economically depressed Catholic neighborhoods in West Belfast.

He believed an effective redevelopment plan for West Belfast would “do more for ending the violence than any security policy.”

The cardinal also was involved in ecumenical work and urged Irish Catholics and Protestants to “help one another to stay faithful to Christ in a world where more and more people walk away from him.”

A firm supporter of the Northern Ireland peace process, the cardinal rejected the idea that the province’s problems could be solved by forming an independent state.

In 1992, when Cardinal Daly turned 75 and offered his resignation to Pope John Paul II, the offer was refused, which left the cardinal to lead the Irish church through one of its most difficult periods in modern history as a series of child abuse cases involving clerics came to light.

Saying the scandals caused him much personal pain, he repeatedly apologized for the harm caused by church members and took the unprecedented step of appearing on a live television talk show to make his apology more widely known.

He also played a major role in drawing up new procedures for how the church should respond to the problem in a policy document, “The Framework for a Church Response to Child Abuse,” published in 1996.

Cardinal Brady told those at Cardinal Daly’s funeral that rebuilding trust within Ireland’s Catholic Church “will entail making sure that children are safe at every moment and in every church setting. It will require complete commitment to the path initiated by Cardinal Daly, of working with the civil authorities and whole parish communities to ensure best practice, cooperation and accountability in safeguarding children in all church activities.”

Cardinal Daly also rallied for more effective action in protecting the environment and called for a real change of lifestyle to protect the planet. He wrote a book, “The Minding of Planet Earth,” in 2004 and said that given the scale of looming ecological crisis, much of what had been done up to that point was mere tokenism.

A native of Northern Ireland, Cardinal Daly was born in 1917 in County Antrim’s largely Catholic town of Loughguile, where relations with the Protestant minority had been described as always good.

He was educated at St. Malachy’s College in Belfast and earned a master’s degree from Queen’s University Belfast. He then went to the national seminary, St. Patrick’s College, Maynooth, where he was ordained in 1941 for the Diocese of Down and Connor.

After earning a doctorate in divinity from Maynooth in 1945, he spent the next 21 years as a lecturer in scholastic philosophy at Queen’s University.

He attended the Second Vatican Council as a theological adviser to members of the Irish hierarchy and was named bishop of Ardagh and Clonmacnois in 1967. He served there until his appointment to Down and Connor in 1982.

In 1990 he was named archbishop of Armagh, which made him the spiritual leader of all the Catholics of the island of Ireland – both those of British Northern Ireland and the Irish Republic.

His death leaves the College of Cardinals with 183 members, 112 of whom are under age 80 and therefore eligible to vote in a conclave.