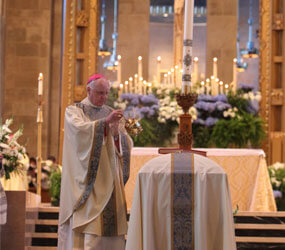 In a funeral liturgy that celebrated his quiet optimism and selfless leadership, Archbishop William D. Borders was laid to rest April 23 at the Cathedral of Mary Our Queen in Homeland.

The liturgy attracted more than 1,000 mourners from across the archdiocese and around the nation, including about 200 priests and deacons, two cardinals and several archbishops and bishops. The congregation broke into spontaneous applause at the end of the celebration – honoring the man who had been Baltimore’s spiritual shepherd from 1974 until his 1989 retirement.

Archbishop Borders, 96, died April 19 after a battle with colon cancer.

In his homily, Wilmington Bishop W. Francis Malooly remembered his friend as a giving man who cultivated talents in others. Bishop Malooly recalled that even though Archbishop Borders suffered physical ailments – including ongoing back problems and a heart attack in his first year in Baltimore – the archbishop never once complained.

“He was simple in the best sense of the word,” said Bishop Malooly, a former auxiliary bishop of Baltimore, “direct, faith-filled, joyful. You couldn’t rattle him because of his unshakable faith in the Lord.”

Bishop Malooly last met with his mentor Easter Sunday. The two had a 45-minute discussion during which the Wilmington bishop talked about their time together in Baltimore. Archbishop Borders focused on asking questions about the challenges Bishop Malooly was facing in his diocese.

“I was looking back,” Bishop Malooly said. “He was always looking ahead.”

In welcoming the congregation, Archbishop Edwin F. O’Brien said his predecessor had a “heart of gold and a will of steel.”

“What a gift his priesthood of nearly 70 years and episcopate of 41 years has been to millions of us,” said Archbishop O’Brien, who later read from condolence letters sent to him by Cardinal Tarcisio Bertone, the Vatican Secretary of State, and Archbishop Pietro Sambi, apostolic nuncio to the United States.

The bishops speculated that the two were playfully wagering on who would first return to the Lord.

“I dare say that as we Christians would judge it, Archbishop Borders has at last won the wager,” Archbishop O’Brien said.

Many friends and colleagues told The Catholic Review that Archbishop Borders was a pioneer in calling many different people to leadership. He appointed women and minorities to key leadership positions throughout the archdiocese. He also established the vicariate system that delegated more responsibilities to his auxiliary bishops.

Bishop John H. Ricard, S.S.J. of Pensacola-Tallahassee, Fla., whom Archbishop Borders nominated to be the first black auxiliary bishop of Baltimore, said his friend “would teach you what to do.”

“He had a great disposition all the time,” Bishop Ricard said. “He was a consummate pastor, even as a bishop. It permeated everything he did.”

Michelly Merrick, director of the archdiocesan division of human resources, recalled that when her father was dying of cancer, Archbishop Borders paid him a visit at Mercy Medical Center in Baltimore.

“It meant so much to my father to have him do that,” said the parishioner of St. Francis Xavier in Baltimore. “He did it quietly, without ever saying a word to me. There’s no way you can really summarize what that means to you.”

Standing outside a cathedral whose entrances were draped in black bunting, Merrick added that Archbishop Borders also consoled her after the death of her husband.

Gov. Martin J. O’Malley told The Catholic Review he wanted to be at the funeral to honor a great man.

“I knew him primarily through his reputation of service and the tremendous humility that he brought to his leadership of the diocese,” O’Malley said. “He was a person who was truly a servant of others and a man who never said an unkind word about anybody – a real prince of a man.”

Maria Loren joined a busload of residents from Mercy Ridge Retirement Community in Timonium who traveled to the cathedral for the funeral. Archbishop Borders had often celebrated Masses at Mercy Ridge, where he lived the last years of his long life.

“He was adorable,” Loren said. “He was always pleasant with everyone even when he was sick.”

At the conclusion of the liturgy, family members crowded the cathedral’s undercroft where Cardinal William H. Keeler led services for Archbishop Borders’ entombment in the crypt. At their conclusion, the family began singing “Back Home Again in Indiana.”

“He was always so gentle,” Ken Borders said.

Born in Washington, Ind., Archbishop Borders intended to be ordained for the Archdiocese of Indianapolis before responding in 1936 to an appeal from Archbishop Joseph F. Rummel of New Orleans for priests to come to Louisiana.

After his 1940 ordination, Archbishop Borders served as a parish priest in Baton Rouge before enlisting in the U.S. Army Chaplain Corps in 1943. He served as a battalion chaplain with the 362nd Infantry Regiment of the 91st Infantry Division in North Africa and Italy. He held the rank of major and was awarded the Bronze Star for Valor for carrying a wounded soldier to safety while under fire.

Archbishop Borders later served as a chaplain at Louisiana State University and a parish priest in the newly created Diocese of Baton Rouge.

Pope Paul VI appointed him the founding Bishop of the Diocese of Orlando in 1968 and six year later named him the Archbishop of Baltimore. He took on challenges related to the inner city and social justice in Charm City, writing numerous pastoral letters on topics ranging from women in the church to collegiality.

Christopher Gunty contributed to this article.