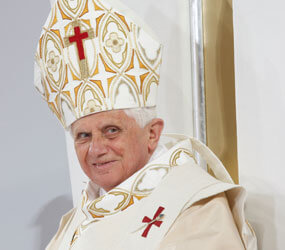 VATICAN CITY – At the five-year mark, two key objectives of Pope Benedict XVI’s pontificate have come into clear focus: creating space for religion in the public sphere and space for God in private lives.

In hundreds of speeches and homilies, in three encyclicals, on 13 foreign trips, during synods of bishops and even through new Web sites, the German pontiff has confronted what he calls a modern “crisis of faith,” saying the root cause of moral and social ills is a reluctance to acknowledge the truth that comes from God.

To counter this crisis, he has proposed Christianity as a religion of love, not rules. Its core mission, he has said repeatedly, is to help people accept God’s love and share it, recognizing that true love involves a willingness to make sacrifices.

His emphasis on God as Creator has tapped into ecological awareness, for which he’s been dubbed the “green pope.” He has presented the faith as a path not only to salvation, but also to social justice and true happiness.

Elected April 19, 2005, Pope Benedict has surprised those who expected a doctrinaire disciplinarian. As universal pastor, he has led Catholics back to the basics of their faith, catechizing them on Christianity’s foundational practices, writings and beliefs, ranging from the Confessions of St. Augustine to the sign of the cross.

But Pope Benedict’s quiet teaching mission has been frequently overshadowed by problems and crises that have grabbed headlines, provoked criticism of the church and left the German pontiff with an uphill battle to get a hearing.

The fifth anniversary of his election is a case in point. It was viewed by many in the Vatican as opportunity for the pope to stand in the media spotlight, underline the essential themes of his pontificate and prepare the world for the second volume of his work, “Jesus of Nazareth.”

But in recent weeks, fallout from the priestly sex abuse crisis has muted the celebratory atmosphere at the Vatican and placed papal aides on the defensive.

In a letter to Irish Catholics in March, the pope personally apologized to victims of priestly sexual abuse and announced new steps to heal the wounds of the scandal, including a Vatican investigation and a year of penitential reparation.

Vatican officials viewed the letter as an unprecedented act of transparency by a pope who, even as a cardinal, pushed for harsher penalties against abusers. For critics, however, the papal letter was merely more words. Soon the Vatican was denying accusations that the pope himself, as a German archbishop, failed to adequately monitor a priest abuser.

Other controversies have eclipsed the pope’s wider message during his first five years. Visiting his native Bavaria in 2006, he upset many Islamic leaders when he quoted a medieval Byzantine emperor who said the prophet Mohammed had brought “things only evil and inhuman, such as his command” to spread the faith by the sword.

The pope later said he was merely citing and not endorsing the criticism of Islam, but he conceded that the speech was open to misinterpretation. Then he began a bridge-building effort with Muslim scholars that eventually led to a major new chapter in Vatican-Muslim dialogue.

During a late 2006 visit to Turkey, the pope prayed in Istanbul’s Blue Mosque next to an Islamic cleric, a gesture of respect that resonated positively throughout the Islamic world. At the same time, he continued to insist that all religions must reject violence carried out in their name.

Liturgy has been a major focus of Pope Benedict. It is one of the areas where he wants to better balance the renewal launched by the Second Vatican Council with the church’s tradition – a process he calls “innovation in continuity.”

In 2007, the pope’s removal of restrictions on use of the Tridentine rite, the Latin-language liturgy that predates the Second Vatican Council, was a major concession to traditionalists and part of a push toward an agreement with the breakaway Society of St. Pius X.

But when he lifted the excommunications of four of the society’s bishops in early 2009, that reconciliation project nearly derailed. One of the four, Bishop Richard Williamson, had three days earlier provoked outrage with assertions that the Holocaust was exaggerated and that no Jews died in Nazi gas chambers.

The pope moved to repair damage with Jewish groups, and in a remarkable letter about the episode he thanked “our Jewish friends” who helped restore a sense of trust. In the same letter, however, he expressed sadness that some Catholics seemed willing to believe he was changing direction on Catholic-Jewish relations and were ready to “attack me with open hostility.”

Although he never planned to imitate his globetrotting predecessor, Pope Benedict has traveled to six continents on 13 foreign trips during his first five years. The 14th will come in mid-April when he visits Malta, the first of five trips planned for 2010.

One of his most successful journeys was to the United States in 2008, when he visited Washington and New York and addressed the United Nations. In speeches and homilies, he set forth a moral challenge to the wider U.S. culture on issues ranging from economic justice to abortion, but without coming across as doctrinaire or bullying – and the reception was unusually positive.

The pope also expressed his personal shame at the priestly sex abuse scandal that had shaken the church in the United States, meeting and praying with a group of abuse victims. It was a gesture he would repeat three months later on a trip to Australia for World Youth Day.

The pope’s most demanding trip was his Holy Land pilgrimage in 2009, which took him to holy places in Jordan, Israel and the Palestinian territories. Visiting a mosque in Jordan, the pope was able to build more bridges with Muslim communities in the Middle East. In Jerusalem, where he was thrust into the politics of the long-simmering Israeli-Palestinian conflict, he prodded both sides, supporting Palestinians’ right to statehood but urging them to reject terrorism.

The list of Pope Benedict’s other accomplishments includes documents, meetings and spiritual initiatives:

– His three encyclicals have placed love and charity at the center of church life. In 2006, the encyclical “God Is Love” described the faith as charity in action, and said God cannot be shut out of personal and social life. “On Christian Hope” in 2007 presented Jesus Christ as the source of love and hope in eternal salvation, the “great hope” that can sustain contemporary men and women. “Charity in Truth” in 2009 said social justice was inseparable from the concept of Christian charity, and called for reform of international economic institutions and practices.

– His book, “Jesus of Nazareth,” which has sold more than 2 million copies, emphasized that Jesus was God, not merely a moralist or a political revolutionary or a social reformer. In calling for a personal relationship with Jesus, it touched on a point the pope has made elsewhere: “One can never know Christ only theoretically.”

– The pope has presided over three synods of bishops: on the Eucharist in 2005, on Scripture in 2008 and on Africa in 2009, and has convened one on the Middle East for October. He streamlined the format of these encounters to allow for more exchange of opinion, and has sometimes joined in the discussions. There’s much interest in his post-synodal document on Scripture, expected this spring, because the pope has insisted that familiarity with the Bible is essential to living the Christian life.

– The “Year of St. Paul” in 2008-2009 familiarized Catholics with the man considered the model of Christian conversion and the archetypal evangelizer. It sought to rekindle a missionary awareness throughout the church.

– In calling the “Year for Priests,” which ends in June, the pope said the church must acknowledge that some priests have done great harm to others, but must also thank God for the gifts the majority of priests have given to the church and the world.

– The pope’s letter to the church in China in 2008 was a landmark attempt to reconcile the divided Catholic community there and launch a platform for dialogue with civil authorities. It attempted to disentangle the knot of ecclesial and political problems in China by presenting a clear vision of the church and its mission, and a strong case for the respect of religious freedom.