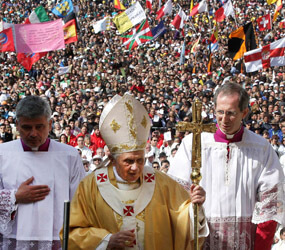 FATIMA, Portugal – Celebrating Mass at Fatima, Pope Benedict XVI said the prophetic mission of Mary’s apparitions there has not ended and has special relevance for a world still caught in a “cycle of death and terror.”

Speaking to a vast crowd at the Portuguese sanctuary, the pope said the message of Fatima was especially relevant at a time of waning belief in the divine and of continuing strife among peoples.

“We would be mistaken to think that Fatima’s prophetic mission is complete,” the pope said. From the earliest times, he said, humanity “has succeeded in unleashing a cycle of death and terror, but failed in bringing it to an end.”

The German pope celebrated the liturgy May 13, the anniversary of the first in a series of six Marian apparitions to three shepherd children in the village of Fatima in 1917. After arriving in his popemobile, he stood at the altar and looked out on an estimated 500,000 people who held up crosses, icons and the flags of many nations.

As sunshine broke through rain clouds, a Neocatechumenal Way group from Moscow unfurled a large banner near the altar that read: “Mary, thank you for your help to Russia.”

Many of the pilgrims had walked, some more than 100 miles, to reach the sanctuary in Portugal’s hilly interior.

Rose Herlihy, a 17-year-old from Virginia, stood near the altar holding an American flag. She came to Fatima this year with her grandmother and said the sanctuary was a special place.

“You always can feel Our Lady here, you can feel her watching out for you,” she said.

When he arrived in Fatima May 12, the pope prayed before a statue of Mary that stands at the site of the apparitions. He paid tribute to his predecessor, Pope John Paul II, who was convinced that the “secrets” of Fatima had a personal connection to the assassination attempt made against him May 13, 1981.

At the Mass, Pope Benedict offered a less personalistic perspective on the apparitions and the messages of Fatima.

He said some people might react with jealousy to Mary’s apparitions to the three young visionaries, disappointed that they have not had such experiences. But that’s a mistake, he said, because God’s power is great.

“God … has the power to come to us, particularly through our inner senses, so that the soul can receive the gentle touch of a reality which is beyond the senses,” he said. The pope has described the Fatima apparitions as “interior visions” that are real but are not perceived through the normal human senses.

“For this to happen, we must cultivate an interior watchfulness of the heart which, for most of the time, we do not possess on account of the powerful pressure exerted by outside realities and the images and concerns which fill our soul,” he said.

Fatima’s message and mission are not over, the pope said, because the need for penance and conversion in the world continues. He gave thanks that the spiritual movement set in motion by the events at Fatima has spread all over the globe, and he looked ahead to 2017, when the world will celebrate the 100th anniversary of the apparitions.

The pope’s remarks reflected his long-held view that the Fatima apparitions did not announce particular apocalyptic events, but a more general succession of trials for the church.

On the first day of his trip to Portugal, speaking to reporters on his plane, the pope suggested that the Fatima prophecy of a time of suffering for the church could refer, in a general way, to the priestly sex abuse crisis. He cautioned, however, against tying the Fatima messages too specifically to particular persons or experiences.

The third secret of Fatima’s vision of a “bishop in white” who falls dead after being shot by soldiers was understood by many as referring to Pope John Paul, who was seriously wounded but survived the 1981 shooting.

On his plane, Pope Benedict suggested that the pope in the vision may stand for the whole church, which makes the message of Fatima a kind of permanent challenge.

“The Lord told us that the church will always be suffering in various ways, up to the end of the world. The important point is that the message, the answer of Fatima, is not substantially addressed to particular devotions, but is the fundamental response: permanent conversion, penance, prayer, and the three cardinal virtues: faith, hope and charity,” he said.

The Vatican spokesman, Jesuit Father Federico Lombardi, told reporters May 12 that the pope understands Fatima as an open-ended call to conversion, in response to situations of suffering in the church that arise from sin. Today, the spokesman said, there is a focus on clerical sex abuse, but in five or 10 years there could be another crisis from inside or outside the church.

Father Lombardi offered a hypothetical example: Perhaps, he said, the church will be seen one day as not close enough to the poor, as too closely tied to earthly goods, and in need of conversion. The message of Fatima would be valid for that situation, too, and for many others, he said.

At the end of the Mass, Pope Benedict spent time with the many sick and disabled people near the altar. He offered them a special greeting, saying that by identifying with Christ, they can give meaning to their own suffering.

“You can overcome the feeling of the uselessness of suffering which consumes a person from within and makes him feel a burden to those around him when, in reality, suffering which is lived with Jesus assists in the salvation of your brethren,” he said.

Afterward, the pope prayed before the tombs of the three Fatima visionaries: Blesseds Francisco and Jacinta Marto, who died at a young age and were beatified 10 years ago, and Carmelite Sister Lucia dos Santos, who died in 2005. Her canonization cause is pending.