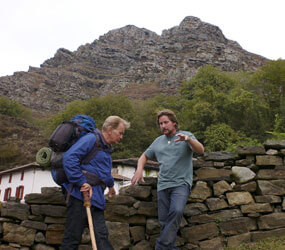 TORONTO – Actor and director Emilio Estevez reluctantly went to Spain to tell a story about how faith, hope and walking are all part of the American way of overcoming hard times.

The movie has “no nudity. There are no explosions. There are no car chases,” said Estevez. “It’s about people. It’s about this community of broken souls. And there’s a ton of humor in it.”

Estevez told The Catholic Register, a Canadian weekly, that his new film “The Way” is about American spirituality. The story follows four characters walking the Camino de Santiago de Compostela, or the Way of St. James, through Spain.

“Americans are searching for something. The Camino serves as the ultimate metaphor for life,” said Estevez.

The movie premieres Sept. 10 at the Toronto International Film Festival, where Estevez will be seeking a North American distribution deal. The film is to be distributed outside North America by Icon Productions.

It was Estevez’s father, Martin Sheen, who first proposed making a film about the Camino seven years ago. During a break in filming “The West Wing,” Sheen had attended a family reunion in Ireland, then headed for Spain to walk the Camino. But Sheen had to be back in the United States and did not have the six to eight weeks it takes to walk the pilgrim’s path to the cathedral in Santiago de Compostela, where the remains of St. James the Greater can be found.

Sheen, his grandson and a family friend did most of the route by Mercedes, but walked part of the way.

The veteran film actor came back and insisted his son had to make a movie about the Camino. At first, Estevez said no.

“It’s the old dilemma,” said Estevez. “You can’t say no to your father.”

What started as a brief outline became 40 or 50 pages of script and led to Estevez reading as many books as possible about the Camino. Journalist Jack Hitt’s book “Off the Road: A Modern-Day Walk Down the Pilgrim’s Route Into Spain,” captured Estevez’s imagination and helped give shape to the story. By this time, Estevez had a full-fledged project he had never wanted to do.

In “The Way,” Sheen plays a 70-year-old American doctor who travels to Spain to claim the body of his son, who died halfway through a pilgrimage. The grieving father decides to complete the walk his son began and falls in with an oddball group of companions: an Irishman angry with the church, a cynical Canadian woman looking for some vague redemption and a Dutchman who seems lost.

In test screenings across the United States, Estevez found the film got its most positive response from university students and senior citizens. He said young and old Americans find themselves looking on the wreckage of a broken economy and wondering whether there needs to be more to life than consumer confidence.

Estevez’s characters in “The Way” are also wondering about meaning in their lives.

“None of these characters is in any way perfect. In fact they’re all flawed, broken and not particularly attractive. They’re difficult to be around – for each other anyway,” he said. “Ultimately, what they discover is that it is a community, a global community, and they are emblematic of that. And we can’t do it alone. We can’t walk this earth by ourselves. We need community. We need faith. We ultimately need each other.”

Walking inevitably becomes a theme in a movie about a pilgrimage.

“Isn’t it our first instinct?” asked Estevez. “When we’re babies it’s the only thing we want to do – to get on our two feet and move forward.”

Getting the walking right was an issue during filming. Sheen was walking too fast, too confidently, too vigorously for the director’s tastes.

A father burying his son and then walking for weeks through a strange country may seem like a pretty grim premise for a movie, but Estevez said he believes he has made a film about American resilience.

“America will bounce back,” he said. “Because of our resilience, because of our faith and our hope. I think faith plays an enormous part of it.”