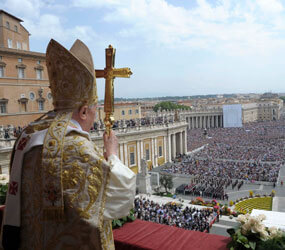 VATICAN CITY – In an Easter blessing to the world, Pope Benedict XVI prayed that Christ’s resurrection may open paths of “freedom, justice and peace” for troubled populations of the Middle East and Africa.

The pope urged an end to violence in Libya and Ivory Coast, assistance to refugees flooding out of North Africa and consolation for the victims of the Japanese earthquake. He prayed for those persecuted for their Christian faith, and praised their courage.

He spoke from the central balcony of St. Peter’s Basilica April 24 in his blessing “urbi et orbi” (to the city of Rome and to the world), after celebrating Mass for nearly 100,000 people in St. Peter’s Square. Broadcast to many countries and live-streamed on the Internet, it was the last major event on the 84-year-old pontiff’s heavy Holy Week schedule.

Pope Benedict said the resurrection of Christ must not be viewed as “the fruit of speculation or mystical experience.” It happened in a precise moment and marked history forever, giving human events new strength, new hope and new meaning, he said.

“The entire cosmos is rejoicing today,” and every person open to God has reason to be glad, he said.

But the joy of Easter contrasts with “the cries and laments that arise from so many painful situations: deprivation, hunger, disease, war, violence,” the pope said.

He prayed that “the splendor of Christ reach the peoples of the Middle East, so that the light of peace and of human dignity may overcome the darkness of division, hate and violence.” In Libya, he said, diplomacy and violence need to take the place of armed fighting, and the suffering must have access to humanitarian aid.

The pope alluded to the civil unrest that has spread throughout northern Africa and the Middle East, encouraging all citizens there, especially young people, to work for a society where poverty is defeated and where “every political choice is inspired by respect for the human person.” The refugees who have fled the conflicts deserve a generous response by other populations, he added.

The pope said the many forms of suffering in “this wounded world” make the Easter message all the more meaningful.

“In our hearts there is joy and sorrow, on our faces there are smiles and tears. Such is our earthly reality. But Christ is risen, he is alive and he walks with us,” he said. He then offered Easter greetings in 65 languages, including Chinese, Hindi and Swahili.

The pope arrived at the Easter liturgy in an open jeep, riding through a crowd that overflowed the square into adjacent streets. Many of the pilgrims were Poles who had already arrived in Rome for the May 1 beatification of Pope John Paul II.

As clouds gave way to sunshine, the pope celebrated Mass on an altar surrounded by flower gardens of yellow narcissus, cream-colored roses and blue delphiniums – all donated and shipped to Rome by Dutch florists.

After the Gospel reading, an Orthodox choir sang a hymn of psalms of the Byzantine liturgical tradition, marking the fact that the Catholic and Orthodox celebration of Easter fell on the same day this year.

In a lengthy Easter vigil Mass in St. Peter’s Basilica the night before, the pope baptized and confirmed six adults from Albania, China, Peru, Russia, Singapore and Switzerland. He poured holy water from a golden shell over each catechumen’s head, and later accepted offertory gifts from the newly baptized.

In a sermon, he analyzed why the Christian’s sense of environmental responsibility is directly connected to the core beliefs of the faith.

“We relate to God the creator, and so we have a responsibility for creation,” he said. “Only because God created everything can he give us life and direct our lives.”

The trajectory of salvation history, which reaches a summit with Christ’s resurrection, reaches all the way back to creation, he said. For the Christian, he said, the account of creation is not about the scientific process involved, but something deeper: it says that the source of everything is not pure chance, but “creative reason, love and freedom.”

The pope rejected an evolutionary account that excludes a divine purpose.

“It is not the case that the expanding universe, at a late stage, in some tiny corner of the cosmos, there evolved randomly some species of living being capable of reasoning and of trying to find rationality within creation, or to bring rationality into it,” he said.

“If man were merely a random product of evolution in some place on the margins of the universe, then life would make no sense,” he said. “Reason is there at the beginning: creative, divine reason.”

The pope said Easter was a good time for Christians to remind themselves that the faith embraces everything about the human being, from his origins to his eternal destiny.

“Life in the church’s faith involves more than a set of feelings and sentiments and perhaps moral obligations,” he said.

On Good Friday, the pope presided over a nighttime Way of the Cross liturgy at Rome’s Colosseum, where tradition holds that early Christians were put to death. Kneeling on a platform on a hillside facing the ancient amphitheater, the pope opened the ceremony with a prayer that drew attention to the constant struggle between good and evil in human history.

He appeared to refer to the priestly sex abuse scandal when he spoke of the “hour of darkness” when “an emptiness of meaning and values nullifies the work of education, and the disorder of the heart disfigures the innocence of the small and the weak.”

The meditations for the 14 Stations of the Cross were written this year by an Augustinian nun, Mother Maria Rita Piccione. The texts encouraged Christians to develop the ability to listen to the subtle voice of God that speaks through the human conscience, and not to ignore the needs of the poor and suffering in their midst.

In a closing talk, the pope said that reliving the drama of Christ’s crucifixion demonstrates that the cross is not a triumphal symbol but rather the sign of “God’s immense love” for humanity.