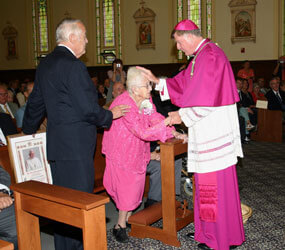 NORTHBRIDGE, Mass. – Elizabeth T. Gauthier “has always viewed life as a glorious adventure,” and at age 110, she continues to approach it with enthusiasm, according to her son.

Mrs. Gauthier, considered a super-centenarian by the U.S. census and the Guinness World Records, celebrated her birthday at her parish church, St. Peter’s in Northbridge, by going to Mass, which reflected the importance of faith in her daily life.

The Mass drew about 200 relatives and friends from Canada and the United States, said Edgar Gauthier, her 78-year-old son and only child. Worcester Bishop Robert J. McManus and several priests were there, too.

During the June 5 Mass, when Bishop McManus gave her an apostolic blessing from Pope Benedict XVI, Mrs. Gauthier said she wasn’t expecting that. The congregation sang “Happy Birthday,” and she waved to the crowd.

In his homily, Father Richard A. Fortin, a family friend who is pastor of Our Lady of the Assumption Parish in Millbury, said Mrs. Gauthier was a blessing to St. Peter’s because of her faithful witness to Christ. He said she trusts in God’s goodness, keeps her heart open to others, and that there’s little wrong with her and much that’s right.

Son Edgar in a talk noted his mother’s firm belief in God and an unwavering commitment to the church’s teachings. He said she came to St. Peter’s in 1915, helped raise money to erase the debt and met the man she would marry, Ulric Gauthier, now deceased.

In discussing his mother’s enthusiasm for life, he noted that she received an award from the Worcester diocesan Haitian Apostolate for sponsoring Haitian student Yanique Verdieu. He said her travels included going China at age 99, where she climbed the steps to the Great Wall; Europe at age 102, where she was crowned “queen of the cruise”; and Mexico where she’s wintered for the past 16 years. Edgar Gauthier said he lives with her and travels with her; he has no wife or children.

“Mother, I hope that God will continue to grant you a joyful and more extended life than he has already granted you,” he said. “I hope that the best still lies ahead, be that a matter of days, weeks, months or years. I promise that I shall do whatever is necessary to bring this wish to fruition.”

Edgar Gauthier told The Catholic Free Press, the diocesan newspaper, that his mother still attends Mass weekly – a witness to those tempted to skip – he said. He said she is devoted to the rosary, but her sight and hearing are poor, which would make an interview difficult.

But he shared her advice: “Don’t sit in a rocking chair and watch TV all day. Get up and do something.”

“My mother doesn’t know that people 110 are not supposed to be traveling,” he said. “I haven’t told her.”

He said she believes nutrition and diet are important; they eat fruits, vegetables and little red meat. However, she has her nightly chocolates.

She started voting in 1928 and has done so ever since, he said.

“Her mind is quite sharp and she remembers lots of things,” Edgar Gauthier said. “She remembers before electricity … before indoor plumbing … the first time they got a vacuum cleaner.”

He said she did well on parts of a memory test for a longevity study by Boston University Medical Center, which learned of her age through a Catholic Free Press story about her Haitian Apostolate award more than a year ago.

The university referred him to the Guinness World Records, he said. He said his mother is to be listed among documented super-centenarians – people age 110 or over.