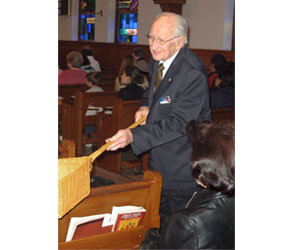 WOODBRIDGE, N.J. – James H. Carrigan rose from a pew at St. James Church, picked up a collection basket and joined a team of ushers striding up the aisles.

With a seemingly ever-present smile, Carrigan moved from row to row, deftly extending the basket to accept the donations.

Afterward, Carrigan returned to his seat, but was soon giving bulletins to worshipers and chatting with others after a recent Sunday Mass.

Age may have slowed Carrigan, who turned 100 in August, but he said it has not prevented him from living his Catholic faith and giving back to St. James Parish, his spiritual home for more than 60 years.

“I wake up and I say my prayers,” Carrigan said. “I usually go to 12 o’clock Mass every day. I keep going as long as I can because I am coming up to the end of my term, you know? And I want to be prepared.”

Regarding his longevity, Carrigan said with a laugh he used to tell people, “I eat my Wheaties.”

“Three square meals a day, seven hours of sleep each night and good friends,” he added.

“When you retire, you shouldn’t sit home watching TV because if you do you will die there. I like to live, go out. Every Sunday after Mass I have lunch with my friend. I belong to the Woodbridge Senior Club, where I used to be an officer, and I enjoy that.

“I am slowing up, but I am satisfied because I don’t have to hurry anywhere.”

Carrigan said his faith has always played an important role in his life, especially while serving with the U.S. Army in Europe during World War II.

“There was nothing else to fall back on,” he said. “I was saying my prayers constantly. When you are over there you are scared so you want to be prepared when you do go. That was one thing I was thankful for, being a Catholic – I knew a lot of prayers.”

After the war, Carrigan studied at a dental school and made false teeth for a living.

He and his wife, who died about 10 years ago, raised three children in St. James Parish.

Father Charles W. Cicerale, pastor, appreciates Carrigan’s service as an inspiration to parishioners of all ages.

“He is a good model for the young, that you can be faithful and consistent in the practice of their faith even if it is in little ways,” Father Cicerale said.

“What he does is a gathering of the gifts so that I can then offer them to God. He plays an important role,” the priest added. “And, staying active is win-win. The more he walks up and down that aisle he is a getting a good bit of exercise.”

In addition to being an usher, Carrigan volunteers as an altar server and has been a member of the Knights of Columbus Council 857 for 40 years.

“It is the weirdest thing to have an altar server who is almost 40 years older than me,” Father Cicerale said. “We celebrate Mass five days a week. He is usually there four days and apologizes the next day if he couldn’t make it.’

When it is needed, Carrigan also offers encouragement to both ushers and parishioners, too, Father Cicerale said.

“One lost his wife just two weeks ago, so he is also kind of like a minister to them,” the pastor noted. “He always has a smile, is always upbeat. In the seven years I have been here I have never seen him down or grouchy.”

Carrigan’s 100th birthday also provided the parish with another opportunity to learn from his experience, Father Cicerale said. Before Mass, he invited Carrigan to stand with him at the baptismal font, told the faithful there was a special birthday to celebrate and led them in singing “Happy Birthday.”

“Then I said, ‘Jim, tell everyone what keeps you going.’ I gave him the microphone and he made a witness to the people about the power of his faith and his prayer life.”