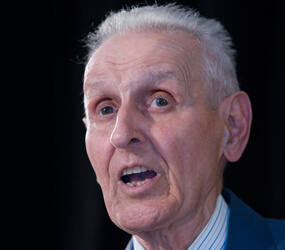 WASHINGTON – Jack Kevorkian, dubbed “Dr. Death” for his longtime advocacy of assisted suicide and his role in assisting in the deaths of 130 people, died June 3 at age 83 in a hospital in the Detroit area.

The former medical pathologist suffered from kidney-related problems.
Kevorkian was frequently in the spotlight throughout the 1990s, from his first role in an assisted suicide in Michigan in 1990 until 1999 when he was sentenced to serve 10-25 years after being convicted of second-degree murder for assisting in a nationally televised death of a man with Lou Gehrig’s disease.

Released on parole in 2007, Kevorkian was banned from assisting in suicides or advising anyone on how to make his suicide machine he called the “Mercitron.” He was permitted to speak out in favor of assisted suicide, which he did in numerous speeches, interviews and editorials.

Throughout Kevorkian’s years of advocating assisted suicide and his direct involvement in this practice, church leaders repeatedly condemned his actions.
On the day of his death, the Michigan Catholic Conference released a statement saying: “Assisted suicide is and will always be an affront to the dignity of the human person, a heinous practice that must be aggressively confronted and contrasted by true compassion, support and love. Jack Kevorkian’s legacy of brutality and vain will now be chronicled by history.”

A June 3 statement by Ned McGrath, director of communications for the Detroit Archdiocese, noted that much of the commentary on Kevorkian’s death omitted the “sobering and deadly legacy he leaves behind.”

“May God have mercy on his soul and on the scores of confused, conflicted and, at times, clinically depressed victims he killed,” he added.

McGrath stressed that the “Catholic Church holds all human life sacred” and said it is “both ironic and tragic that Kevorkian himself was afforded a dignified, natural death in a hospital, something he denied to those who came to him in desperation, only to be poisoned and have their bodies left in places such as vans and motel rooms.”

Father Frank Pavone, national director of Priests for Life, said in a statement that in the wake of Kevorkian’s death his organization would renew its commitment “to proclaim that life is better than death. Every life has burdens. When we respond to the call to bear one another’s burdens, then we close the door to despair.”

“Many of the victims on whom Jack Kevorkian preyed were people with disabilities who had no terminal illness; one was simply old. In at least five cases, autopsies were unable to confirm any disease at all,” said Burke J. Balch, director of National Right to Life Committee’s Robert Powell Center for Medical Ethics.
“While some euthanasia advocates have sought to distance themselves from his bizarre positions and tactics, his tragic legacy illustrates the dangers to the most vulnerable when compassionate, humane responses to depression or disability are replaced with death as an acceptable final solution,” Balch added in a June 3 statement.

Catholic officials in Michigan, the center of Kevorkian’s activity, continually voiced the church’s opposition to assisted suicide.
In 1993, the year Michigan approved a statute outlawing assisted suicide, then-Archbishop Adam J. Maida of Detroit said that while “lawmakers and the courts will, no doubt, continue to debate this issue, the church’s teaching remains consistent.”

“Opening the door to the concept of ‘assisted suicide’ is truly a very dangerous thing,” he added. “Simply put, it suggests that we can make ourselves God and decide when and how we should die or someone else should die.”
In 1994, the Michigan Supreme Court ruled that assisting in a suicide was a common-law felony and that the state Constitution provided no protective rights to suicide assistance.

Five years later, when Kevorkian was sentenced to prison, Cardinal Maida, who has since retired as Detroit’s archbishop, said: “For almost nine years now, I’ve been speaking out against Jack Kevorkian’s deadly, duplicitous approach to pain management.” He said he was pleased with Kevorkian’s prison sentence but also found it “lamentable that it took 130 victims to get to this point.”

The U.S. bishops continue to speak up against physician- assisted suicide for the terminally ill which is legal in Oregon, Washington and Montana.
During their mid-June meeting in Seattle, they will consider a proposed policy statement on physician-assisted suicide. It will be the first time they will be taking on this divisive issue as a body of bishops.

Cardinal Daniel N. DiNardo of Galveston-Houston, chairman of the U.S. Conference of Catholic Bishops’ Committee on Pro-Life Activities, said the time is right for the statement, titled “To Live Each Day With Dignity.”

“After years of relative inaction following legalization of physician-assisted suicide in Oregon in 1994, the assisted suicide movement has shown a strong resurgence in activity,” the cardinal said in a news release about the proposed statement.

A Gallup Poll released May 31 showed that Americans are more closely divided on the issue of physician-assisted suicide than on any other issue, including abortion, out-of-wedlock births, gay and lesbian relations or medical testing on animals.
Asked whether doctor-assisted suicide was morally acceptable or morally wrong, 45 percent said they thought it was acceptable and 48 percent said they believed it to be wrong – a result that fell within the survey’s margin of error of plus or minus 4 percentage points.