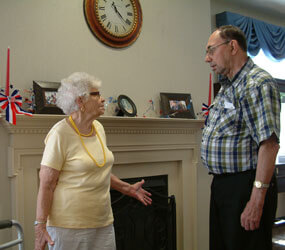 Although still mentally very alert, Grace Watkins, at age 90 and after suffering a minor fracture in her left leg when she tripped and fell was finding it increasingly difficult to care for her three-bedroom home in Hawthorne, where she had lived alone since her husband died eight years earlier.

Sixty-nine-year-old widower Jerry Allen faced a similar problem. Partially disabled after falling 18 feet from a ladder at work a few years before, an accident that “somewhat” affected his memory, he began to realize he was “not really capable” of taking care of his Dundalk house or of driving a car.

In each case, it was a son who persuaded the parent to consider assisted living as a way to ease the workload and stress, and to improve their quality of life.

“I wasn’t sure about it,” Watkins said, “but my son talked me into it.”

Allen said he was at first reluctant to leave his friends and neighbors but listened to his son, who convinced him he would be much better off somewhere close that would be comfortable as well as worry and chore free.

And so, a little less than a year ago, Watkins and Allen found themselves at the Lighthouse Senior Living assisted living community in Middle River, just across Old Eastern Avenue from Our Lady of Mount Carmel Church.

“I’m really glad now that I came here,” said Watkins as she wheeled her walker along the corridor toward her room.

“Me too,” said Allen, who accompanied her for the friendly stroll. “I’ve become very involved in the activities here, and made a lot of new friends.”

“I’m busy all the time,” Watkins chimed in with a grin.

Each of them occupies a comfortable studio apartment with a spacious bathroom and kitchenette. Lighthouse housekeeping staff clean the rooms, change the linen and take care of the laundry, among other things.

“I don’t have to do any of the work I used to do at home, it’s all taken care of,” Watkins explained.

Neither resident now requires much assistance from the Lighthouse staff but each insisted that it is, as Watkins put it, “re-assuring” that help is moments away should she need it.

“I think it makes me feel more secure,” said Allen, “knowing that if we need anything we can get it, and quickly.”

Whether they need anything or not, staff members regularly check on the residents to make sure.

That was comforting to Watkins, who injured her hand in another fall she experienced when she first moved into the community.

“They came around every day to dress my hand and make sure it was healing properly, and that made me feel really good about being here,” she said.

While both residents acknowledge they miss some elements of living in their long-time homes, they said they find that the increased socialization the community provides and the many organized and casual activities, not to mention the elimination of housework, more than makes up for it.

Both agreed that the Lighthouse is close enough to their old neighborhoods so that family members and friends can visit easily and frequently, so they don’t feel isolated.

Watkins and Allen take advantage of the community-organized, frequent bus trips that are provided for recreation and shopping.

“We get to go to Wal-Mart to do our shopping, to get anything we need, and next week we’re taking a bus trip to visit Cal Ripken Stadium,” Watkins said. “It’s really a lot of fun and there are so many nice and friendly people here.”

On her dresser is a photograph of her and her soldier husband in uniform taken in 1943, during World War II, and another one of the couple on their 50th wedding anniversary.

“In a lot of ways, it really does feel like home,” Watkins said, “but as I said before I’m a lot busier than I was, and I like it that way.”