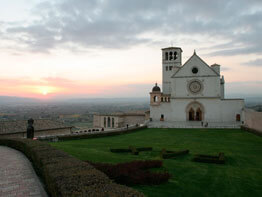 ASSISI, Italy – Assisi – the birthplace of St. Francis, saint of the poor – has instituted a ban on begging.

The mayor of Assisi, Claudio Ricci, signed an ordinance in mid-April that prohibits begging within 500 meters (550 yards) of any church, square or public building – a decree that effectively makes the entire hill town off-limits to beggars.

Mayor Ricci said he instituted the ban after numerous complaints from pilgrims, tourists and citizens about aggressive and insistent forms of begging outside the city’s medieval churches.

“The phenomenon was reaching proportions that went far beyond the poor beggar who occasionally asks for charity. This has become an organized and profitable activity,” Mayor Ricci said.

The measure drew criticism from leftist political leaders in Italy, who said the ban was simply the latest form of social intolerance.

At the Vatican, Cardinal Renato Martino, head of the Pontifical Council for Justice and Peace, also expressed his concern.

“Asking for charity is not a crime, and I don’t see why it should be prohibited by law,” Cardinal Martino told the Italian newspaper La Repubblica.

The cardinal said that although there may be “pseudo-professionals” among beggars, one should keep in mind the counsel of St. Augustine, who said it was best to help any poor person so as not to run the risk of denying someone who might be Christ himself.

But Conventual Franciscan Father Vincenzo Coli, the custodian of the Basilica of St. Francis of Assisi, said the Mayor Ricci’s action may be a good thing.

“We need to see how it’s applied, but if it brings about a certain respect for oneself, for the places and for others, it’s not a bad thing,” Father Coli said.

St. Francis sometimes begged alms to share the experience of the poor, but said this should be done only when it was not possible to support oneself through work, Father Coli said.

It’s difficult to say what the 13th-century saint would do today, because the times have changed dramatically, he said.

“Today one needs to be attentive: We have people who are doing this as a profession, and others who really are in need,” he said.

Father Coli said he supported another provision of the new ordinance, which bans people from lying or sitting on the ground near churches and other monuments.

He said that in warm weather tourists lie in the sun in the open area in front of the Basilica of St. Francis, making it look like a crowded beach.