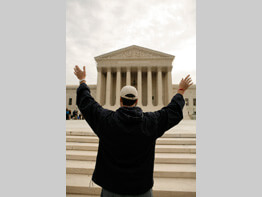 WASHINGTON – On the opening day of its fall term Oct. 6, the Supreme Court declined to hear four cases dealing with abortion or abortion-related protest efforts.

– Require Arizona to issue “choose life” license plates to those who request them.

– Reverse a Missouri Department of Corrections policy that said prisoners could not be transported by prison authorities to have abortions, which are paid for by the prisoners themselves.

– Leave intact the New Jersey Supreme Court’s ruling that an abortion doctor had no legal obligation to advise a patient that the 6- to 8-week-old fetus she sought to abort was “a complete, separate, unique and irreplaceable human being.”

In the Arizona case, the 9th U.S. Circuit Court of Appeals had ruled that the Motor Vehicle Division violated the free-speech rights of Arizona Life Coalition members by rejecting their application for “choose life” license plates.

The state suspended its specialty plate operations while the case was in the courts. Arizona previously had issued specialty plates for the Fraternal Order of Police, the Arizona Historical Society and the University of Phoenix.

Several other states offer similar “choose life” plates, which include the faces of two babies and the phrase “choose life.”

In another case framed as a free speech issue, the court for the third time declined to take up an appeal by the American Coalition of Life Activists seeking to overturn a costly verdict over their “wanted” posters.

Four Oregon physicians and an abortion clinic sued the activists under anti-racketeering statutes over portrayals of the doctors on Old West-style “wanted” posters that said they had committed crimes against humanity and listed their addresses and telephone numbers.

A jury awarded the doctors more than $100 million after a trial in which they described fearing for their lives, wearing disguises and bulletproof vests, and hiring bodyguards. On appeal the judgment was reduced to about $16 million.

The 9th Circuit upheld the verdict.

Rejecting the Missouri case left intact an 8th Circuit Court of Appeals ruling that struck down the state Department of Corrections policy prohibiting inmates from having elective abortions. The policy extended to refusing to transport inmates for abortions that they would pay for themselves.

The 8th Circuit held that inmates do not give up their constitutional right to obtain abortions and that because they could not get to doctors’ offices on their own, the state would have to transport them if asked.

In the New Jersey case, the state Supreme Court had held that an abortion doctor was not legally obligated to describe a developing fetus as “a complete, separate, unique and irreplaceable human being.” Rosa Acuna sued Dr. Sheldon C. Turkish after an incomplete abortion left her with hemorrhaging weeks later.

When she was being treated, a nurse told her that “the doctor had left parts of the baby inside.” Ms. Acuna said that was the first time she realized it “was a baby and not just blood” at that stage of development, which was seven weeks when she had the abortion.

She said in court papers that if she had received better answers to her question asking “if it was the baby in there,” she would not have had an abortion. She said Turkish told her it was “just blood,” she said.

Turkish later denied giving that answer and said he probably would have said: A “seven-week pregnancy is not a living human being,” but rather “is just tissue at this time.”