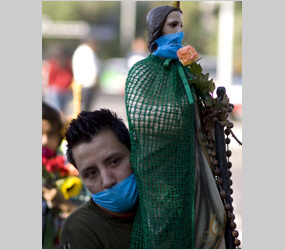 MEXICO CITY – Cardinal Norberto Rivera Carrera of Mexico City prayed to Our Lady of Guadalupe and canceled Masses in the archdiocese April 26 due to the swine flu outbreak.

The decision to cancel Masses followed instructions from the local health secretariat that all large gatherings be canceled as authorities raced to contain an epidemic that threatened to spread well beyond Mexico. By April 29, more than 150 Mexicans had died from the flu and more than 2,400 were sick in the Mexican capital.

Cardinal Rivera celebrated Mass April 26 behind closed doors in the Metropolitan Cathedral for about 50 people who had been permitted to enter.

In his homily, he called on the Mexican people to never lose hope and to assist each another during the crisis. He also prayed to Our Lady of Guadalupe for intervention, noting that she had helped during pandemics four times since 1554.

“We beg for your protection and help for quickly overcoming the epidemic that has affected our nation,” Cardinal Rivera prayed. “Cover us with your cloak; free us from this evil.”

Later in the day, an image of Christ on the cross – known as the “Lord of Health” – was removed from its spot in the cathedral for the first time since 1850 and carried in a procession around central Mexico City. The “Cristo,” as the image is known, has been credited with past miracles, including intervention in an 1850 cholera outbreak.

In Mexico City, as the disease spread, face masks were common, traffic was light and many businesses stayed closed. The swine flu forced the closure of schools, universities, museums and several other tourist attractions throughout the country.

As the United States confirmed the flu-related death of a 23-month-old in Texas April 28 and more than 60 cases of the illness, Catholic bishops suggested ways that pastors could alter the celebration of Mass in an effort to prevent the spread of the virus.

Bishops in the dioceses of Dallas and Austin, Texas, encouraged pastors to avoid Communion under both species and offer only the host. They also highlighted the importance of good hygiene among eucharistic ministers.

While it remained up to individual bishops to decide whether or not they wanted to make changes to the Mass, the U.S. Conference of Catholic Bishops’ Secretariat of Divine Worship said in a statement in late April it did not feel that widespread liturgical adaptations were necessary at that time to prevent the spread of the swine flu.

In England, where at least three cases of the flu have been reported, the Diocese of Lancaster April 29 published an online booklet called “Sustaining Pastoral Presence: Influenza Outbreaks,” with information about the swine flu and preventive measures for chaplains and clergy.

Cases have been confirmed in Canada, Germany, Austria and Israel. Although no cases have been reported in Egypt, the government there announced April 28 that it would begin slaughtering pigs as a preventive measure.

According to the World Health Organization, the swine flu cannot be contracted by eating well-cooked pork products. The WHO’s pandemic alert level is phase 4, two levels below a full pandemic outbreak.

No cases had been confirmed in Asia as of April 29.

Initially, New York City’s cases were related to St. Francis Preparatory School, which closed the week of April 27 and canceled all student activities “because of the number of students with flulike symptoms,” the school said on its Web site.

“The New York City Health Department is working closely with your school’s administration to ensure that measures are in place to provide you with up-to-date information on how to protect yourself from infection,” the department said in a note to students distributed by the school.

With approximately 2,750 students, St. Francis Prep, located in the borough of Queens, describes itself as the largest private Catholic secondary school in the United States.