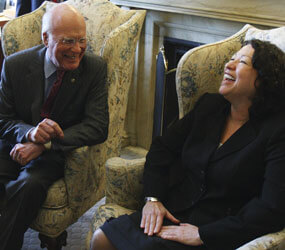 WASHINGTON – As Judge Sonia Sotomayor was making the rounds of Senate offices for courtesy calls prior to confirmation hearings this summer, a popular exercise among commentators has been trying to define the judicial leanings of President Barack Obama’s first nominee to the Supreme Court.

As a current judge of the 2nd U.S. Circuit Court of Appeals and a former U.S. District Court judge, Sotomayor’s rulings and dissents were being carefully analyzed by both those predisposed to support her nomination and those looking for reasons to reject her as a potential Supreme Court justice.

Those whose principal concern is abortion have sought clues to her judicial temperament – and any potential she might have for groundbreaking decisions – in the few cases in which she ruled on some aspect of abortion-related laws. In a 2002 case challenging the Mexico City policy, which bars foreign aid recipients from offering or referring for abortions, she upheld the Bush administration’s right to follow the policy. Neither that case nor others related to abortion clinic protests and decided on procedural grounds dealt directly with legal rights and abortion.

Others are parsing what she has written on religious liberty, employee-employer rights or racial discrimination.

The first few days after Sotomayor’s nomination was announced May 26 brought a flurry of quickly released statements based largely on impressions of her rulings, background or on the fact that she was nominated by Obama.

Charmaine Yoest, president of Americans United for Life, a public-interest law and policy organization, said in a statement that “for all the president’s talk of finding ‘common ground,’ this appointment completely contradicts that hollow promise.” Without explaining why, Yoest said Sotomayor’s “judicial philosophy undermines common ground” and called her “a radical pick that divides America.”

Other commentators just as quickly leapt to support Sotomayor, also with little explanation for their conclusions.

For instance, Michael Keegan, president of People for the American Way, said in a statement that Obama “used this opportunity to do exactly what he promised in last year’s election – to select a person who has demonstrated an abiding commitment to core constitutional values of justice, opportunity and equality under the law.”

Keegan went on to call the nomination “good news for people who care about the future of our rights and liberties.”

Meanwhile, the White House has kept up a steady stream of press releases with praise for Sotomayor from fellow judges, law professors, her one-time supervisors in the New York district attorney’s office and her former law clerks.

They included, for example, a comment made to National Public Radio by former chief judge of the 2nd Circuit, Judge Jon Newman, who called Sotomayor a brilliant lawyer and a fair-minded pragmatist who is “everything one would want in a first-rate judge.”

Among those reviewing Sotomayor’s written opinions for a sense of her judicial thinking was Tom Goldstein, a partner at the law firm Akin Gump, writing on Scotusblog, an attorney-written reference and analysis blog on the Supreme Court. He has largely commentary-free summaries of Sotomayor’s opinions on a range of civil cases and a separate piece about her rulings on race.

While initially the subject of a flurry of discussion, the fact that Sotomayor would become the sixth Catholic on the nine-member court has found little traction in ongoing discussions, outside of a handful of debates on the Internet.

Sotomayor was raised a Catholic, attending Catholic elementary and high schools. The White House, describing her current involvement in the church, said she “attends church for family celebrations and other important events.”

Until Justice Samuel Alito joined the court in January 2006, becoming the fifth Catholic, there had previously only been a majority of Protestant justices.

The first Catholic on the court was Chief Justice Roger Taney from 1836 to 1864. After the first Jewish justice, Louis Brandeis, joined the court in 1916, there had regularly been one Catholic justice at a time, along with one or two Jewish justices and a majority of Protestants.