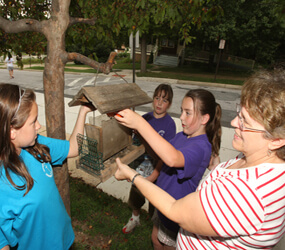 Collecting and recycling drink pouches, planting bay grasses and installing organic gardens are just some of the myriad activities Catholic schools in the Archdiocese of Baltimore have engaged in as they “go green.”

“It’s a trademark of our school,” said Sandy Ward, who has taught science at Ascension School in Halethorpe for 22 years. “It has helped us make the students more aware of the impact they have on the environment.”

Ascension was designated a green school and has been recertified twice.

Ward, like other teachers in the archdiocese, has turned to The Maryland Association for Environmental and Outdoor Education as well as the Chesapeake Bay Foundation for creative means to engage students in environmental lessons.

Students have participated in BirdSleuth, a classroom feeder watch program through Cornell Lab of Ornithology, adopted a polar bear cub through the National Wildlife Federation and planted grasses, which were transplanted in the Gunpowder River. They have also held recycle relays, raised ladybugs and butterflies and taken field trips to nature centers. They will start an environmental club this year for middle school students.

“It makes science more real for them, more immediate,” said Ward. “The hands-on aspect of it shows they can have an impact. It helps them become lifelong stewards of the bay and recognize it as a great resource that we depend on, but which also depends on us.”

At St. Michael the Archangel in Overlea, parent Erika Borlie launched the Drink Pouch Brigade through the company TerraCycle Inc. Through the Drink Pouch Brigade, students dispose of Capri Sun and Honest Kids drink pouches in special containers in the school cafeteria. Borlie and her son, Noah, a second-grader, bring the drink pouches home, run them through the washing machine and then send them back to the company in special collection containers. TerraCycle then converts the pouches into tote bags, pencil cases, backpacks, etc. Schools earn $.02 per pouch.

“The school gives so much to our kids, why not as a parent gives some time to them and teach the kids about recycling products?” said Borlie of her involvement.

She said they have collected 3,000 drink pouches since March, and kids are continuing to collect pouches during the summer.

Students from Mother Seton School in Emmitsburg and the community installed the Willow Rill Nature Trail this year, and the school was certified as a Maryland Green School. Mother Seton has an outdoor education area with organic gardens featuring pumpkins, strawberries and tomato plants, among other produce.

“Sister Joanne Goecke, our principal, felt very strongly that we should try to meet the requirements for a green school,” said Gordon Love, assistant principal. “It really speaks about our faith and stewardship of the land and the environment.”

The school started a science club, and a benefactor enabled them to install energy-efficient windows in an older section of the school. Presently, Mother Seton is investigating the possibility of solar power on campus. By switching from Styrofoam cafeteria trays to those which must be washed, the school reduced the amount of cafeteria trash by half, Mr. Love said.

He said the 375-student body has reacted positively to being environmentally conscious.

“I think they’re excited to see they’re a part of something greater than themselves,” he said. “Most of our students have taken on a green project whether it be releasing butterflies, raising pumpkins or putting up bird feeders on the rill.”

The school has a green committee composed of teachers, a local environmentalist, a master gardener and others.

To learn how to become a Maryland Green School, visit http://www.maeoe.org/.