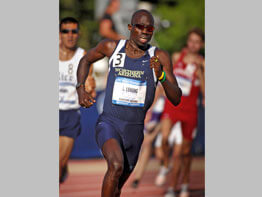 SYRACUSE, N.Y. – In 2001, some “lost boys of Sudan” arrived in the U.S. and the first phase of their long run from the horrors of their homeland’s civil war was fading in the distance.

For one boy resettled in the Syracuse Diocese, however, that year marked the beginning of a new run, both literally and figuratively.

Lopez Lomong, a parishioner at St. Leo’s Church in Tully, will have an opportunity to reach the pinnacle of his sport when he competes in the 2008 Summer Olympic Games in Beijing.

Lomong qualified for the 1,500-meter run by finishing third July 6 at the U.S. Olympic trials in Eugene, Ore.

Upon qualifying, Lomong promptly called his foster parents, Barb and Rob Rogers of Tully, and told them, “When you put God first in your life, anything is possible.”

When Lomong arrived in central New York, he was immediately welcomed into the home of the Rogers family.

He was one of Sudan’s more than 27,000 lost boys, so called because they were driven from their tribal villages and separated from their parents during the height of their country’s civil war, from 1993 to 2003. After living for years in refugee camps, about 3,800 lost boys were resettled in the United States in 2001.

At age 6, Lomong and other children in his Sudanese village were abducted by militia but he escaped through a hole in the camp wall and fled to Kenya where he was arrested and placed in a refugee camp. Finally, at age 16, Lomong was selected for relocation in the U.S.

Paccia, a parishioner at St. Patrick’s Church in Otisco, said Lomong described his escaping from the Sudanese camp and then seeing his name among those chosen to go to the U.S. as “his two signs from God.”

“He thought he was dead in that camp,” Paccia said. “When he saw his name on that list and knew that he was going (to a new) home, that was a turning point.”

Barb Rogers said that when Lomong was abducted he lost contact with his family and presumed they had died. Recently, however, Lomong was able to contact his biological parents. Rogers said he is determined to help them now.

In addition to competing for the U.S. in the upcoming Olympics, Lomong has been a member of Team Darfur, a coalition of international athletes committed to raising awareness about the genocide occurring in the Darfur region of Sudan.

“When we were in Africa, we didn’t know what was there for us as kids – we just ran,” Lomong said on his Web site, www.lopezlomong.org. “God was planning all of this stuff for me, and I didn’t know. Now I’m using running to get the word out about how horrible things were back in Sudan during the war.

“Sometimes these things are not on CNN, so if I put out the word, I hope people can get the information,” he said. “Right now, similar terrible things are going on in Darfur; people are running out of Darfur, and I put myself in their shoes.”