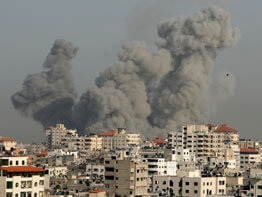 JERUSALEM – After three days of Israeli attacks on Hamas in the Gaza Strip, a local parish priest said the buildings are shaking, the bombing is continuous and “they are bombarding us like the demon.”

“We are only at the beginning,” said Monsignor Manuel Musallam, pastor of Holy Family Parish in Gaza City, in a telephone interview with Catholic News Service Dec. 29. He added that he feared another intifada, or Palestinian uprising.

“We will fight against all hope. We pray and we ask God to find a solution,” said the priest who is maintaining contact with parishioners through text messaging.

The Israelis “are targeting special … places associated with Hamas, even a mosque used by Hamas members. They are all around us. We can hear the aircrafts,” said Monsignor Musallam.

At least 360 Palestinians and four Israelis have been killed as homes were destroyed and hundreds were injured by the Israeli attacks that began Dec. 27 in an attempt to stop Hamas rocket attacks into southern Israel. Hamas is the Palestinian paramilitary organization that runs the Gaza Strip. At least 51 civilians have been killed in the conflict.

Gaza residents are staying in their homes and have access to electricity for only a few hours a day. One source said residents have been keeping the windows open to prevent them from shattering from the nearby bombing, and many children were coming down with colds and flu because of the cold.

Israel blames Hamas for the civilian casualties, noting that they choose to place their weapon stockpiles and installations and carry out missile attacks from civilian areas.

Israel has closed all passages into Gaza to journalists though it has allowed some humanitarian aid to pass.

Israel says that during the past year Iranian-backed terrorists groups in Gaza have fired more than 3,000 rockets, missiles and mortars at civilian targets in the southern Negev region, killing four people and wounding more than 270. Some 6,300 missiles and rockets have been launched into Israel, killing 10 people and injuring almost 800, since 2005 when Israel withdrew from Jewish settlements in the Gaza Strip, according to the Israeli government.

Omar Shaban, project manager in Gaza for the U.S. bishops’ Catholic Relief Services, said Gazans need medical assistance. CRS currently was putting together a plan for after the military operation, which could take “days or weeks,” he said. The plan would possibly include food and blanket distribution as well as counseling, he said.

He noted that thousands of homes had been destroyed by the Israeli attacks and because Hamas strategically located its military installations among the civilian populations.

“Who will rebuild these homes?” he said. “People have been angry toward this position not only of Hamas but other military groups. Usually the Palestinian factions put their locations within the people; they use people or a mosque or other public building to hide. People are angry, not only about this but also about the poverty and their miserable life.”

However, he said the Israeli attacks were working in Hamas’ favor as the Arab world views Hamas as the only group resisting Israeli occupation.

“They are getting more popular. Entire families have been killed. This aggression makes it difficult for … liberals like me to speak out,” he said. “Israel may be hurting Hamas tactically but the leaders are using these stories to get revenge.”

Monsignor Musallam said that the military attack would not put an end to the missile attacks.

“The more they attack the more they will be attacked,” he said. “We are under siege. We are looking for our liberation, for our freedom.”

Although he is due to leave the Gaza parish after serving there for 13 years, Monsignor Musallam said he would leave in January or February only if things calmed down.

Three days into the attack Hamas was still able to lob missiles into Ashdod, an Israeli port city some 26 miles from the Gaza border, killing two people.

Sari Kalimi, a 32-year-old mother of four living in Sderot, said the border city in Israel has been living under war conditions for eight years.

“They are terrorists who are trying to kill us. They are trying to kill my children. For eight years we have not been living a normal life,” she said in a phone interview. “That God saves us with miracles from their missiles does not (negate the fact) that every missile sent here could kill people. They have landed in schools and nursery schools.

“I don’t want anyone to die but it can’t be that they try to kill me and we will just sit back here quietly,” she said, noting that the Hamas missiles are aimed at Israeli civilian targets within the Green Line, which separates Israel and the Palestinian territories.

“What about me? I just want to live a normal life. I want my children to live. It is a country’s basic right to defend its civilians. If they stop shooting us, we won’t shoot them. Instead of trying to rehabilitate the agricultural lands we left them (after the Gaza withdrawal) they are trying to kill me,” she said.

Meanwhile in Gaza, one Christian family prepared to spend the night in their kitchen, believing that was the safest room in their third-floor apartment. He said his family was frightened and he tried to calm them down by praying together.

“We also believe there is no other way but prayers on both sides,” said the man, who asked that his name not be used. “The solution is not going to be this way; there will just be an escalation. I am afraid of the silence of the world.”

They have remained in their apartment since the attacks began, he said, but he had to go out on the third day to buy some bread.

“There were thousands of people in line at the bakery so I had to go to the supermarket to see if I could find something else,” he said.

He added: “The civilians on both sides are suffering. We need people to think about peace and about what is going on. I pity everybody. I pity myself. I live in this world and can’t find any way out.”