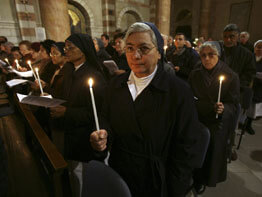 VATICAN CITY – As Israel continued its ground and air assault on Gaza, Pope Benedict XVI renewed his appeal for an immediate end to hostilities and offered prayers for the numerous victims.

“The dramatic news arriving from Gaza demonstrates how the refusal of dialogue can lead to situations of untold suffering for populations that are once again the victims of hatred and war,” the pope said at his noon blessing at the Vatican Jan. 4.

His comments came as Israel sent troops and tanks into Gaza while continuing air and artillery shelling against targets in the Palestinian territory. Palestinian medical officials said more than 500 Palestinians, including at least 100 women and children, had been killed in the offensive. Four Israeli civilians and one soldier were reported killed in the first 10 days of fighting.

The pope said he supported the initiative of the heads of Christian churches in the Holy Land, who requested prayers for peace and justice in Gaza. He asked Catholics to pray for the victims and the wounded, and for those suffering in other ways in the conflict.

“War and hatred are not the solution to problems, which is confirmed by recent history,” the pope said. He urged Israeli and Palestinian authorities to take immediate action to “put an end to the present tragic situation.”

Israel began its offensive Dec. 27 in an attempt to stop Hamas rocket attacks into southern Israel. Hamas is the Palestinian paramilitary organization that runs the Gaza Strip.