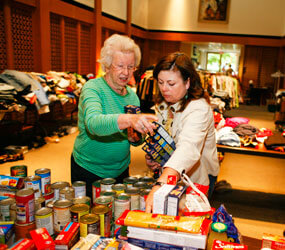 NASHVILLE, Tenn. – Armies of volunteers continued to canvass devastated neighborhoods in middle Tennessee to clean up the wreckage as the floodwaters recede, and residents faced a long road to recovery.

The torrential rains that fell as May began created the worst natural disaster in the modern history of this part of the state, causing unprecedented flood damage, killing 23 people and leaving thousands displaced.

But in the aftermath, residents continue to show the world why Tennessee is known as the Volunteer State.

When St. John Vianney parishioner Raymond Crump found his business, Olympian Construction Company in Hendersonville, underwater, he headed over to his church in Gallatin to help pump out the flooded basement.

“I’ve got trucks under water. It’s hurt bad,” Crump said of his business. Keeping things in perspective, he added that, “my family’s safe, my home’s safe.” He found a temporary location for his business and hoped that he and his 31 employees can get up and running soon “so we can go out and help other people.”

Professionals and volunteers alike will continue to be in high demand as the area recovers from the flood during the months ahead.

Nashville Mayor Karl Dean said the flood damage will easily exceed $1.5 billion. His office has announced the creation of a full-time recovery team.

In parishes and neighborhoods throughout the Diocese of Nashville, families were sorting through the waterlogged remnants of their lives, hoping to salvage important family photos and keepsakes. The rest of their belongings spilled onto their front lawns, awaiting debris removal crews.

During the first days of May, the floods swallowed area neighborhoods from Hickman County to Montgomery County, knocked out electricity, and surrounded downtown landmarks such as the Country Music Hall of Fame.

Forty-two counties have been classified as national disaster areas, and 600 representatives from the Federal Emergency Management Agency have set up shop in middle Tennessee to inspect properties and assess the damage. Approximately 23,000 Tennesseans have already registered with FEMA, and more than $51 million in federal aid has been approved. The state also is dipping into its “rainy day fund” to help residents.

Since many people did not have flood insurance on their private residences, they will have to rely on low-cost loans and some grant money from FEMA, but it will certainly not be enough for people who have lost everything.

The flood of May 2010 will be “a personal tragedy for a lot of people,” Tennessee Gov. Phil Bredesen said, as people may quickly run through their personal savings to rebuild.

Diocesan parishes and school communities have quickly pulled together to help neighbors. Hundreds of parish volunteers have stepped up to help homeowners clear out their flooded homes; many more members of the diocese have offered their prayers and donated generously to relief efforts.

Catholic-run Camp Marymount suffered some damage to older structures on the property, but opened its doors for people to stay in its new cabins. Students at St. Ann School raised $7,000 for disaster relief during a weeklong campaign and offered personal reflections at a special prayer service for flood victims May 10.

For the most part, diocesan schools and parishes, including the most historic ones, escaped the floods unscathed except for minor damage. The chancery office had water damage on the first floor and had to pull out all the carpets, but no archives or valuables were damaged.

The Bellevue area of Nashville near St. Henry was one of the hardest hit by the floods, but damage was certainly not limited to one neighborhood. The Pennington Bend area near the Opryland Hotel was hard hit, as was north Nashville near St. Pius X Parish.

In Clarksville, streets were flooded for nearly a week after the rain stopped. While not many parishioners’ homes were destroyed, “huge amounts of industrial property got clobbered,” said Deacon Dominick Azzara of Immaculate Conception Church.

The local mall and other businesses also had flood damage, he said, so people were missing work, and some weren’t getting paid time off.

Deacon Azzara already dipped into the parish’s charitable fund to help pay one person’s rent, and “I anticipate there will be more people needing help with bills if they can’t go back to work.”

He said charitable contributions to parishioners and nonparishioners alike will pick up in the weeks and months ahead. “The Catholic Church has a reputation for generosity,” he said.