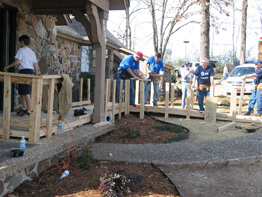 LITTLE ROCK, Ark. – Call it a “Catholic Extreme Makeover.”
When parishioners at Christ the King Church in Little Rock heard about Father Udochukwu “Udo” Vincent Ogbuji’s paralysis following a car wreck, they prayed for the priest’s recovery. And when their pastor, Monsignor Francis I. Malone, challenged them to renovate a house in less than two weeks for the former Searcy pastor, they immediately jumped to work.

“They really stepped up with incredible donations,” said Sandy DeCoursey, the parish life/outreach director who oversaw the renovation of the vacant, parish-owned, two-story home.

Before Father Ogbuji, 38, was released from Baptist Rehabilitation Institute, Monsignor J. Gaston Hebert, administrator of the Little Rock Diocese, and Monsignor Malone agreed that the priest needed a home close to his therapists and doctors while at the same time being able to put his priestly vocation to work.

The parish house, however, needed major renovations to accommodate a person in a motorized wheelchair as well as a fresh coat of paint and furnishings.

When Monsignor Malone announced his challenge from the pulpit earlier this year, he asked for laborers and people willing to donate items.

Within a week, the plan was taking shape. Families and parish groups adopted each room in the house, including a chapel and three bedrooms for caretakers and friends who need to stay overnight.

Jim Barre, a parishioner and retired home builder, coordinated several construction projects on the inside and outside of the house. The den on the first floor was transformed into the priest’s bedroom and needed wider doorways.

“That’s what you do. You offer your talents,” Barre said about his volunteer hours.

Other major projects included converting the mudroom into a handicap-accessible bathroom with a “drive-in shower.” An asphalt driveway was paved from the backyard to loop around to the road.

“I dubbed it our Catholic Extreme Makeover,” DeCoursey said. “That’s what it was: getting a handicap-accessible house ready in nine days.”
Overall, 400 parishioners volunteered to renovate the home or donated items or money for the project. “The kitchen was stocked even down to the toothpicks,” DeCoursey said. “We (the parish) spent very little money getting the house renovated.”

Mike and Pam Halter adopted the guest caretaker’s suite on the first floor. With the help of a few friends, Pam Halter collected a twin bed, chair and dresser, and transformed the bedroom and the adjacent bathroom with shades of white and blue.

“I told Sandy I would help and she asked if I would adopt a room and I said yes, so she gave me two (rooms),” Pam Halter said with a laugh.

Downstairs, the master bedroom, living room and dining room were painted in taupes and browns and featured high-end furniture and accessories. Upstairs, there are two bedrooms and an entertainment room.

Volunteers have also signed up for regular housekeeping, grocery shopping and meal preparation. Others have donated money to fund the priest’s care and personal needs. Students at the parish school collected coins during one week in March and gave nearly $5,000 to the fund.

Monsignor Malone said Christ the King was the perfect place for Father Ogbuji to continue his ministry. He has been assigned as an associate pastor there.

“We didn’t want to place him in residential nursing care. It would pretty much eliminate the opportunity for pastoral ministry,” he said. “We are saving someone’s priesthood.”

A Nigerian-born priest assigned to Arkansas since 1999, Father Ogbuji was making plans to begin a master’s degree program in medical bioethics in the fall and return to Nigeria to continue his ministry. Those plans are now secondary to his goal of walking and serving the people of Christ the King Church.

“I am hopeful I can walk again, but I am more hopeful that God will restore in me what he wants to,” Father Ogbuji told the Arkansas Catholic, Little Rock diocesan newspaper. “Even if he doesn’t, I will still be the same person.

“Life is not just about physical appearances. It’s much more than that,” he added. “Life is more about the image of God. It’s about patience and understanding and accepting the will of God even if it conflicts with your own personal plans. Life is about service (even) if you are only able to smile at people. Even if I can’t use my legs and limbs, I can smile and help people who are going through the same things.”