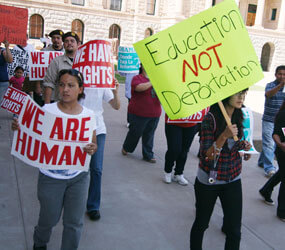 PHOENIX – The Arizona Senate voted down five immigration bills March 17 that proponents argued would crack down on illegal immigration even further than last year’s S.B. 1070, which is still hung up by court challenges.

Meanwhile, Utah Gov. Gary Herbert March 15 signed a series of bills that have been described as a state equivalent of comprehensive immigration reform being sought at the national level. They step up enforcement, but also create a guest worker program that itself is likely to face court challenges.

Among the bills Arizona’s legislators rejected were those that would have required hospitals to verify patients’ legal status before admitting them for nonemergency care, required schools to collect data on immigration status and challenged the 14th Amendment’s provision for birthright citizenship.

“All of the most problematic bills were defeated soundly on the Senate floor,” said Ron Johnson, executive director of the Arizona Catholic Conference, which represents the state’s bishops in public policy matters.

“Clearly we have significant immigration problems facing this country, but these bills do nothing to solve them,” he said. “They actually make things worse for a vulnerable population.”

After the vote, Republican State Sen. Rich Crandall explained his opposition to the bills.

“If you ask anybody what we need to do solve the immigration crisis, they tell you, ‘Secure the border,’ ” he said. “Well, these five bills had nothing to do with the border.”

State Sen. Ron Gould, a Republican and sponsor of the two bills that dealt with birthright citizenship, said the next step is to take the measures to a ballot proposal.

“We’re supposed to be representing the people,” he said.

In Utah, Salt Lake City Bishop John C. Wester lauded the efforts “to adopt humane solutions in the face of the federal government’s failure to act on immigration reform.” He particularly praised Herbert’s willingness to sign immigration bills despite extreme opposition, but said he feared the bills would be unenforceable and unconstitutional.

“While I commend the Utah Legislature for recognizing the value immigrant workers provide to our state and the need to provide legal status for the workers and their families, legal status may only be granted by the federal government,” the bishop said in statement. “One may hope that Utah’s political strategy of passing a law first and seeking federal approval after will be successful. However, on a human level, this political strategy poses severe risks for vulnerable immigrants within our state.”

For example, Bishop Wester said, different effective dates of the laws mean that “for the next two years undocumented immigrants will be pushed further into the shadows while awaiting a chance for legal status.”

He reiterated the position of the U.S. Conference of Catholic Bishops, the Catholic Legal Immigration Network, the National Immigration Law Center and others that “piecemeal immigration reform at a state level does not and cannot adequately address the needs of those who seek to live with basic human dignity and respect within our borders.”

In both Arizona and Utah, demonstrators for and against the immigration legislation gathered outside the state’s respective Capitols.

In the Arizona group was Faustino Santiago, a parishioner at St. Anne Parish in Gilbert, who questioned the bill that would have required schools to get immigration information. The U.S. Supreme Court ruled in 1982 that lack of legal immigration status may not be used to prevent children from getting an education at public schools through the level of high school.

“Taking away children’s education is the worst,” Santiago told The Catholic Sun, newspaper of the Phoenix Diocese. “I don’t understand it. This country is powerful precisely because of its education.”

Santiago said he agreed with the U.S. bishops; meaningful immigration reform had to happen on the national level. Members of his parish are anxious, he said, and not just those in the state illegally.

“Even if you’re undocumented, you know someone who is,” he said. “It’s been hard on the entire community.”

Kathryn Kobor, one of a handful of supporters of the restrictive bills, said she backed the measures because “it’s a matter of public safety.”

“It’s just plain common sense,” she said. “You can’t have that many people come in.”

One interdenominational group had been holding a vigil outside the Arizona Capitol for the past 18 days. Despite having Protestant members, the group gathered around images of Our Lady of Guadalupe.

“The only thing that’s going to help is prayer,” said Maria Nowakowski, a parishioner at St. Louis the King in Glendale.

After the bills were voted down, she said the group would continue to pray, though perhaps at a different location.

“You never know when the next storm will come,” she said. “So we continue praying for our legislators. God has his arms open and is waiting for them.”