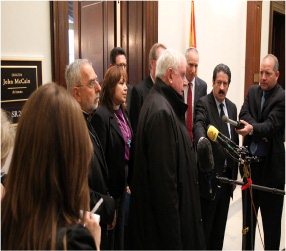 WASHINGTON – A delegation of Arizona religious leaders made the rounds in Washington May 13, encouraging members of Congress to pass comprehensive immigration reform and discussing possible legal challenges to the state’s new immigration law with staff at the Justice Department and the White House.

At a news conference outside the offices of Sen. John McCain, Tucson Bishop Gerald F. Kicanas and United Methodist Bishop Minerva Carcano said their meeting with the Arizona Republican was cordial but that he was adamant about not wanting comprehensive immigration legislation to move in Congress until “the border is secure.”

McCain previously co-sponsored legislation that dealt with border security packaged together with law changes that provide a way for undocumented immigrants to legalize their status and that would fundamentally change the system for legal immigration for family reunification and temporary work. As the Republican nominee for president in 2008, he advocated for legislation similar to that being encouraged by the religious delegation.

Bishop Kicanas told reporters that McCain said circumstances have changed and that he now believes enforcement has to happen separately and first.

McCain, who is facing a difficult primary election this summer, told the religious leaders he wants to beef up the number of Border Patrol officers and expand the wall along the border, they said.

Since 2000, the number of Border Patrol agents has more than doubled, from 8,600 to more than 21,000. Customs and Border Protection, Immigration and Customs Enforcement, the Drug Enforcement Administration and other agencies have an additional 23,000 people working along the border, collectively, according to the National Immigration Forum. Since 2006, hundreds of miles of fencing – much of it 20-foot-high sections of sheet metal – have been built on the Mexican border.

The two bishops and the clergy from other faiths who joined them in the visits said they support efforts to control illegal traffic across the border, especially that related to the illicit – and often violent – drug and weapons trade. But those efforts must be accompanied by efforts to deal with the estimated 12 million undocumented immigrants in the country and the backlogs of people who are waiting for visas to reunite their families or find work in the United States legally.

Bishop Kicanas said legislation should include “an earned pathway to citizenship, not amnesty but an earned path,” as well as ways to keep families together by making it easier for people to bring their relatives into the country legally, because “the family is the nucleus of society and any breakdown of family life causes problems.”

He said he and the others hope that Arizona’s new law will be blocked from being enacted by any of several lawsuits filed and pending that challenge it. Among other provisions, the law requires police officers to arrest those they encounter in the course of work if they are not able to provide documentation of their legal status.

“We cannot have every state determining how federal immigration law is being enforced,” Bishop Kicanas said.