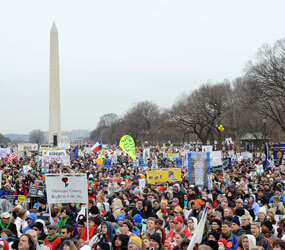 At least 22 parishes from the Archdiocese of Baltimore are planning to send busloads of marchers – as are some area Catholic schools including Mount de Sales Academy in Catonsville, which is sending the entire school.

The Archdiocesan Division of Youth and Young Adults has distributed more than 1,500 tickets for the Rally for Life at the Verizon Center, set for the morning of Jan. 24.

Parishioners and students alike will proudly proclaim their support for the sanctity of human life from conception until natural death.

“It’s important that people go to the March for Life so that we can continue to show our elected officials that the majority of Americans are pro-life,” said Nancy Paltell, the Maryland Catholic Conference’s associate director for respect life.

“Abortion was thrust upon this country to the detriment of women, family and marriage – not to mention the unborn,” she said. “We need to send the message that we as Americans – young and old – are not going to be silent.”

Thousands of archdiocesan parishioners are expected to join tens of thousands of other pro-lifers from across the United States to mark the 38th anniversary of the Jan. 22 U.S. Supreme Court’s Roe v. Wade decision legalizing abortion.

The same day the high court ruled on the Roe case, it also handed down the companion decision Doe v. Bolton. Together, Roe and Doe defined abortion as a constitutional right and overturned most state laws banning the procedure.

The theme of this year’s march in Washington is: “Thou shalt protect the equal right to life of each innocent born and pre-born human in existence at fertilization – no exception, no compromise.”

The event falls on the Monday after the official Roe anniversary to allow participants to visit their representatives on Capitol Hill after a noon rally on the National Mall and a march along Constitution Avenue to the Supreme Court. On the eve of the main event, March for Life organizers plan to hold a mini-rally in Lafayette Park across from the White House.

Among the Roe anniversary events planned in Washington will be an afternoon Pro-Life Leadership Mass Jan. 23 in the St. Vincent de Paul Chapel on the campus of The Catholic University of America. The main celebrant and homilist will be Cardinal Daniel N. DiNardo of Galveston-Houston, chairman of the bishops’ Committee on Pro-Life Activities.

The National Prayer Vigil for Life will be held at the Basilica of the National Shrine of the Immaculate Conception Jan. 23-24. It opens with a 6:30 p.m. Mass in the shrine’s upper church.

A rosary for life will be held in the shrine’s Crypt Church, as will “Holy Hours for Life.” On Jan. 24, morning prayer and Benediction will be followed by a 7:30 a.m. closing Mass.

For the 15th year the Archdiocese of Washington will sponsor its annual pro-life youth Mass and rally the morning of Jan. 24. According to the archdiocese, the success of last year’s event, attended by more than 17,000 young people, has prompted the archdiocese to hold a Mass and rally in two venues this year to accommodate the crowd. One location will be the Verizon Center, Washington’s largest sports arena.

After the March for Life, several pro-life organizations will hold the National Pro-Life Youth Rally near the Supreme Court.