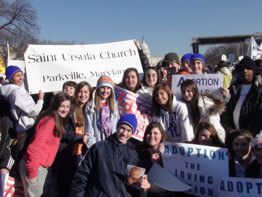 Bundled up in a pink coat and hat, a toddler slept peacefully in her stroller. She was completely unaware that all around her, an estimated 100,000 were participating in the 36th annual March for Life in Washington, D.C., Jan. 22.

The youngster’s serenity did not extend to those standing nearby.
A group of boys from a Pennsylvania Catholic school belted out old Irish tunes. A teenager sat on a friend’s shoulders and juggled pins to the delight of those around him. Children linked arms and chanted, “We love babies, yes we do. We love babies, how about you?”

Their exuberance was aimed at sending one important message: We choose life.

Along with fellow teachers Maureen Hahn and Anne-Marie Vitti, Ms. Schneider accompanied approximately 60 eighth-graders from the Parkville school, as well as parents, parishioners, home-schooling families and friends of the parish.

“My husband and I haven’t been blessed with children,” said Ms. Schneider. “So to know that there would be somebody that would be blessed with a child and choose not to give it life is really difficult for me to understand. So I’m just trying to support women in difficult situations.”

This year’s march was especially poignant for Ms. Schneider, since she and her husband have just been approved to adopt.

“This sort of makes everything come together – being here and doing that, too,” she said.

The parishioner of St. Ursula and St. Margaret in Bel Air believes it is important to bring students to the march because she wants them to be informed.

“I feel like sometimes it’s ignorance that leads us to decision-making,” said Ms. Schneider, who has marched four times.

She wants others to have hope in young people. Ms. Schneider said that when given opportunity and information, they made the choice to come on their own.

Ginny Dauses, campus minister for St. Mary’s High School in Annapolis, witnessed students making that same choice. She went to the march with about 220 students and 30 to 40 chaperones.

Since she began bringing students to the march in 2006, she’s seen the number of students grow so quickly that although they used to fill one bus, this year they filled four and had to turn students away.

It doesn’t surprise her that about 40 percent of St. Mary’s students voluntarily signed up for the march, even though it involved arriving early in the morning and getting home later than they might on a normal school day.

“I think teenagers recognize the truth that a person is a person no matter how small more than any adult does,” said Ms. Dauses. “Am I encouraging them? Yeah. Am I giving them an outlet so they can express it? Yeah. But I’m not forcing them. This wasn’t mandated and over one-third of our school attended. … And that’s pretty amazing if you think about it.”

She added that St. Mary’s students are “pumped up” and ready to go back. She said the teens are already looking forward to the Maryland March for Life, March 9 in Annapolis.

Ms. Dauses heartily disagrees with the way she said the media negatively portrays teenagers as being more into MTV than Christ.

“Teenagers are saying: Enough’s enough. We need to be heard. We need people to know that teenagers are pro-life, and we can see through the lies that the media is trying to fill us with,” she said. “These kids are on fire for Christ.”

For many people, this year’s march held extra significance since President Barack Obama has said that he will sign the Freedom of Choice Act if it reaches his desk. If passed, FOCA would eliminate restrictions on abortion across the country.

“There are many of us who are intensely praying for President Obama and hope that he will have some people around him who will stand for reason,” said Mr. Szabo, who has marched about 10 times.

The violinist and part-time instructor at Towson University hopes to change hearts when it comes to abortion.

Lynn Comegna, a St. Ursula parishioner who went to the march with her eighth-grader, also attended to show Congress what she believes is right.

“I think it is a little more important this year because I think a lot of people don’t understand what the Freedom of Choice Act is about,” she said. “I hope that this will bring some awareness that it’s not just about abortion and a person’s free will to do something. It’s more than that.”

Mr. Szabo added: “It hurts very much what happens in the world today. To stand for life – that’s what God would want.”