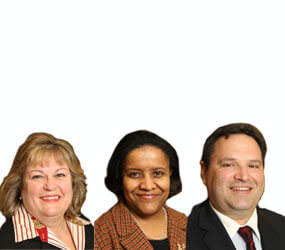 The Archdiocese of Baltimore’s Department of Catholic Schools continues to take shape with the appointment of three key administrators in recent months.

Former St. Mary’s Elementary School principal Margaret Dammeyer has been named an associate superintendent, along with Camille Brown of the Diocese of Rhode Island.

Matt Russell, who comes from the Archdiocese of Washington, will lead tuition, scholarships and secondary programs.

“I am truly looking forward to working with this wonderful team of professionals,” said interim superintendent Barbara Edmondson. “I am confident that the experience that each brings to the Department of Catholic Schools will provide great support for our principals and teachers and will ultimately enrich the lives of our students.”

Profiles of each addition are below.

Brown spent 18 years as a teacher and principal in the Archdiocese of Philadelphia and spent the last four years as assistant superintendent in the Diocese of Providence in Rhode Island.

She heard about the Archdiocese of Baltimore’s restructuring of Catholic schools and wanted to help as associate superintendent.

Brown previously did research for her Ph.D. in Baltimore and has great respect for the archdiocese’s legacy in Catholic education, particularly women like St. Elizabeth Ann Seton and Mother Mary Lange.

“I think they’re two great people to hold up and say, ‘Look what they did,’ and be inspired,” Brown said.

Brown considers re-energizing Catholic schools “a spiritual responsibility because my vocation as a Catholic educator is about building up the church, and the principal way of building up our church is evangelization through our schools.”

Brown’s background is in school leadership and community schools. She hopes to work with principals and community members to strengthen those concepts in the archdiocese. She starts Jan. 3, 2011.

“Our system is tried and proven,” Brown said. “It is a values-based system. Now, more than ever, our society needs Catholic education. Our children need some sort of hope in the future.”

The future of Baltimore’s Catholic schools is important to Margaret Dammeyer.

Dammeyer spent 19 years at St. Mary’s, 11 of which were as principal. Leaving that school’s community two months ago to become an associate superintendent was a tough decision. Dammeyer, who will focus on professional and curriculum development, wants to help the archdiocese at large.

She believes the strategic plan delivered by Archbishop Edwin F. O’Brien’s Blue Ribbon Committee on Schools will be energizing and exciting for schools.

“I think it makes our mission and our vision for how to move forward clear,” Dammeyer said. “It gives us a path to get there.”

Russell seeks fairness for all

Russell, who served as an assistant principal and principal in Washington, will redesign the Baltimore’s scholarship and financial aid system and provide assistance for high school program awareness.

“The archdiocese has taken some very bold steps to try and save Catholic education, and I’m excited to be part of the team that’s implementing those steps,” he said.

Russell said the current economic climate has made financial aid and scholarship need “more poignant. People need help.” He said the archdiocese must develop a system that is fair to all people.

“We’re trying to find ways to make sure we’re evaluating everybody equally so that we can maximize the scarce resources that we have,” Russell said. “The challenge would be much larger if there was no money, but there is some money, and the archdiocese wants to make sure it gets out there to help serve those kids.”