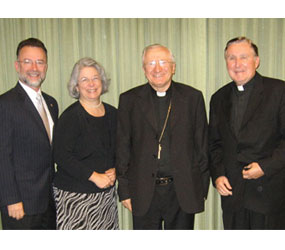 As the Archdiocese of Baltimore’s coordinator for marriage and family enrichment, Lauri Przybysz has always felt families can be a force for evangelization in the Catholic Church.

She expressed that hope to Vatican leaders Sept. 10 and 11.

Przybysz and her husband, John, were invited as members of the Christian Family Movement to make a presentation to the Pontifical Council for the Family. The couple’s longtime friend, Father Donald Conroy from the Diocese of Greensburg in Pennsylvania, spoke with them.

“We were delighted to have a voice there,” Lauri Przybysz said.

The trio took part in a gathering of 35 people from various nations. Although there were language differences, the Catholics had a common passion for family.

“We all have high hopes for marriage,” Lauri Przybysz said. “We’re all trying to strengthen marriages. I feel there was a real positive energy. I think we will be helping parishes and the families that are in them recognize that they have this call and have abilities they may not recognize.”

The presentation talked about how families can be powerful agents in the evangelization process.

The Przybyszes just stepped down as presidents of the Christian Family Movement this summer after a four-year term. The group’s mission is to promote Christ-centered marriage and family life, help people live their faith and to improve society through selfless action.

The group has a method called Observe, Judge, Act that helps form parents as leaders of the church and builds strong families, according to a statement by the Christian Family Movement.

The Przybyszes are parishioners of Our Lady of the Fields in Millersville and have six grown children and 13 grandchildren. When their own children were younger, John and Lauri sought a group that would connect them to other Catholic families. They found the Christian Family Movement.

“People are supposed to be Christ for others and help usher in the kingdom of God,” she said.

One of the realities facing people around the world is divorce. Many Catholics are coming to terms with the end of marriages in their families.

Przybysz said they have an important role in the church because “they have lots of strengths.”

The trip to Rome was the couple’s first and one they will never forget. Lauri Przybysz is currently working on her doctorate degree in ministry from The Catholic University of America.

“It was just a dream come true for someone in ministry,” she said.

For more information about the Christian Family Movement, visit: www.cfm.org