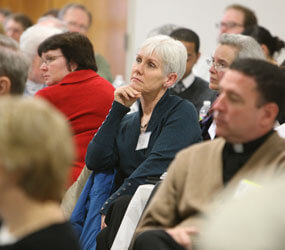 SEVERN – Looking out over more than 100 parish ministry leaders gathered inside St. Bernadette Church Jan. 11, Archbishop Edwin F. O’Brien offered a challenge. They must, he said, bring Christ alive in their faith communities and homes.

“We must be converted,” the archbishop said. “We must be evangelizers. Our faces must become the faces of the living Lord.”

With that call, the archbishop helped launch Equip for Ministry, the Department of Evangelization’s long-awaited formation program for the Archdiocese of Baltimore. It began with a series of informational meetings called “Creating a Culture of Formation in our Parishes and Schools.”

A Jan. 10 meeting was held at St. Peter Parish in Libertytown. The third and final informational meeting will be held Jan. 27, at St. Joseph Parish in Fullerton.

More than 400 laity, consecrated religious and clergy from 110 parishes and 39 schools were expected to be in attendance at the three informational sessions.

Equip for Ministry will consist of a series of in-person and interactive online formation training sessions. DVDs will be available for people who do not have high-speed internet.

Mae Richardson, coordinator of pastoral leadership formation, told attendees at St. Bernadette in Severn that materials and information for Equip for Ministry “raised the bar.”

Father John W. Hurley, executive director of the Department of Evangelization, designated eight principles to help build that culture of formation: recognizing the mission, the call and the need; respecting and celebrating a multicultural church; acknowledging the value of lay ministry; emphasizing competency; providing for formation and celebration; clear expectations; maximizing technology; and serving as role models and collaborators.

“Archbishop O’Brien,” Father Hurley said, “is asking all of us to create a premier culture of formation in our archdiocese. And to do this, we are all in need of ongoing formation.”

Archbishop O’Brien sounded a call of urgency, citing a study that said if not for the Latino population, the state of the Catholic Church in the United States would be “catastrophic.” He said one-third of Catholics entering high school have left the church.

“We have not been forming men and women in the image of Christ,” Archbishop O’Brien. “We have not gone out and made disciples. That’s the goal of any Christian education.”

He set a tone for the meeting, telling people to ask themselves, “What are we doing to evangelize?”

Ruth Puls, director of catechetical and pastoral formation, said Equip for Ministry will hopefully have people asking, “What am I doing to increase my formation as a disciple of Jesus Christ?”

Puls said pastors, pastoral leaders and principals will be crucial to the program’s success.

“This is the start of something,” she said. “It’s ongoing, but we’re off to a really good start.”