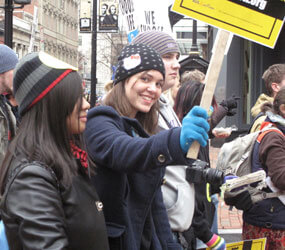 WASHINGTON – As some 20,000 people marched along F Street in Northwest D.C. after the Youth Rally and Mass for Life Jan. 22, Rebecca Ferguson, 14, observed that everyone has a reason for marching.

“Everyone has their own situation and their own family problems. The truth is, any of us could have been aborted,” she said as she headed 37th annual March for Life.

“I was a crisis pregnancy,” she said. “This is a chance for me to stand up for what I believe in.”

Her experience at last year’s march convinced her mother, Sharon Ferguson, to join as a chaperone this year.

Rebecca is the same age, 14, Sharon was when she had her daughter.

“I was told when I was pregnant with her to have an abortion,” Sharon said. “Now she’s growing into a beautiful Catholic young woman.”

A member of St. John the Evangelist in Severna Park, Sharon said she looked at the event not just as a historical or civic exercise, but a spiritual one. She hoped her presence could be an example to her daughter and other young people, noting that she emerged from an unplanned pregnancy even better than before it.

Tens of thousands from across the country marched, hoping to make a difference in the fight against abortion. Local participants were easy to spot, as they boasted large, round, fluorescent green stickers with “Archdiocese of Baltimore” and the archdiocesan crest, courtesy of the archdiocesan Respect Life office.

Nina Morrison was among a group from St. Ignatius, Hickory. The busload of 42 parishioners was blessed by the pastor, Monsignor James M. Barker. It was her eighth march.

“We have to persevere,” she said, because God promises victory. “We have to suffer through it.”

Even though the cause has not been successful in overturning the Supreme Court’s 1973 landmark decision to allow abortion on demand, Morrison believes Congress and the courts are listening.

“I believe they do,” she said, “because we’ve been consistent, because it gets bigger every year.”

According to Catholic News Service, a statement posted on the March for Life Web site said the the crowd for this year’s rally and march “far exceeded” last year’s number, estimated by the organization to be 100,000.

Archbishop Edwin F. O’Brien, who concelebrated the Mass for Life and participated in the events, noted the increase.

“No one,” he said, “who came away from the pro-life Masses in Washington and from the magnificent March for Life could possibly be in doubt that the movement for life is gaining great momentum.

“And how grateful we all must be. But the challenges still need our full support.”

A large Maryland flag led its pack, which included Monica Szabo, from Hamilton, a veteran participant who last marched four years ago. She returned because, with President Barack Obama and a Democratic majority in Congress, she said “We have to let them know that just because they have the majority doesn’t make it right. Liberals and Democrats claim to stand up for the little guy. Well, who’s little than the unborn?”

Jessica Dominguez and Linda Green of St. Louis in Clarksville attended the march for the first time. Each brought two of their children.

Dominguez said she came to “let the world know that women have been deceived. Hopefully they will see the truth.”

“We’re here to witness,” said Paul, who has attended the March for Life all but three years since 1981. “We know God hears our prayers. It’s his victory to win, not ours. We just need to try to be faithful and leave the results to him.”

“Until they change the laws,” Paula Tiller said, “we’ll keep coming back – until we’re heard (by Congress). Because the babies can’t come, we do.”