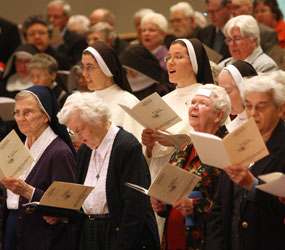 TOWSON – When the Archdiocese of Baltimore consolidated 13 Catholic schools last year, members of religious communities were on the frontlines helping to ease the transition.

“I think so many of you helped in many ways to help people move forward,” Bishop Denis J. Madden told hundreds of religious men and woman during an archdiocesan celebration of World Day for Consecrated Life, held Feb. 19 at Calvert Hall College High School in Towson.

“It’s a matter of moving forward in the Gospel light,” said Bishop Madden, speaking at a dinner reception after celebrating a special Mass for those in consecrated life, “and you are the ones who make this all very possible.”

Bishop Madden noted that a glance at the Catholic Directory reveals the many ways religious serve the archdiocese in education, healthcare, spiritual outreach, charitable ministries, pastoral work and more. He pointed out that half the parishes in Baltimore City are cared for by religious communities.

“What I think is most important is the light that you bring to this archdiocese by your presence,” Bishop Madden said, “and the way you encourage everyone in the archdiocese to lead the Gospel life by your own humble, sincere daily living of it in your communities and in whatever work you are involved in.”

Sister Maria Luz Ortiz, a Mission Helper of the Sacred Heart and Archbishop Edwin F. O’Brien’s delegate to religious, said there are 22 communities of priests and brothers in the Archdiocese of Baltimore and 42 communities of women religious. Several people who live as consecrated virgins or hermits also serve in the archdiocese.

“Those who choose to live a consecrated life do so for the sake of the Gospel,” she said, “and bless the church by their consecration.”

Sister Denise LaRock, a Daughter of Charity who serves as vocation director for her religious community, said the Calvert Hall gathering of so many different expressions of the consecrated life shows strength in diversity.

“It just amazes me how many different ways God calls us to serve,” said Sister Denise, who also presented a reflection on the charism of her religious community.

Sister Susan Engel, a Mission Helper of the Sacred Heart and pastoral associate of Church of the Annunciation in Rosedale, said it’s good for priests, sisters, brothers and others in consecrated life to come together for fellowship.

“We’ve renewed old friendships and we’ve met new people,” she said, “but I think the most important thing is having that sense that we’re all in this together.”