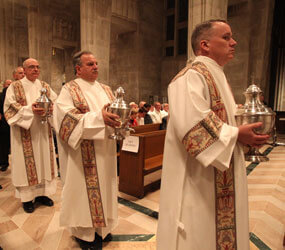 Being a priest can admittedly be demanding for Father Michael S. Triplett. With a declining number of clergymen, ministerial schedules can be tight for the associate pastor of Church of the Resurrection in Ellicott City – just as they are for priests throughout the archdiocese.

He found solidarity and affirmation March 29, when more than 200 priests and deacons came together at Homeland’s Cathedral of Mary Our Queen for the annual Chrism Mass, celebrated by Archbishop Edwin F. O’Brien.

“It’s great to see the care of Archbishop O’Brien for his priests,” Father Triplett said.

During the Mass, the priests publicly renewed their priestly promises. At the end of the liturgy, hundreds of people from throughout the archdiocese showed their appreciation by giving their clergy a prolonged standing ovation – showing their support in a year Pope Benedict XVI has dedicated to the priesthood.

In his homily, Archbishop O’Brien said priests serving in the Archdiocese of Baltimore have been generous, heroic and undaunted in their ministry.

During the solemn liturgy, Archbishop O’Brien followed ancient tradition by consecrating the chrism oil and blessing other oils that clergy will use in their ministry.

The chrism will be used to anoint the newly baptized, seal candidates for confirmation and anoint the hands of priests and the heads of bishops at their ordination, as well as in the rites of anointing at the dedication of churches and altars.

Many candidates and catechumens attended the Chrism Mass, five days before they would be received into the church at the Easter Vigil.

“Seeing all the priests together is really inspiring,” said Candice Jackson, a candidate who will join the Catholic faith at the Church of the Holy Apostles in Gambrills. “It’s impressive to see the reach and the diversity of the church.”

Father Erik J. Arnold, pastor of Our Lady of Perpetual Help in Ellicott City, said he was encouraged to see so many priests turn out.

“I love to see the fraternity of the priests,” he said.