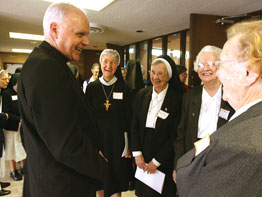 On the same day many Americans celebrated the grit, determination, dedication and hard work of the titans of the gridiron at Super Bowl XLII, the Archdiocese of Baltimore recognized similar qualities in titans of a different sort – the religious sisters, brothers and priests from throughout the archdiocese who have dedicated their lives to God.

More than 250 women and men religious gathered at St. Martin’s Home for the Aged in Catonsville Feb. 3 for a prayer service and dinner celebrating World Day for Consecrated Life. They renewed their vows of chastity, poverty and obedience in the presence of Archbishop Edwin F. O’Brien, who thanked them for their service to the people of the archdiocese.

In a reflection delivered at the prayer service, Archbishop O’Brien recalled that the rabbis who lived at the time of Jesus tried to entice disciples into following them. That was nt so with Jesus, the archbishop said.

“Jesus chooses,” said Archbishop O’Brien. “There’s no bargaining, just following. Each of you has been called by him.”

Those in consecrated life stand as “countersigns” to a world often obsessed with materialism, lust and self-interest, the archbishop said.

Father James Chalan Gady, O.C.D., a native of India who serves as chaplain for St. Martin’s Home for the Aged, has wanted to be a priest since he was a boy. Feeling a call to serve God anywhere in the world, he said he was attracted to an international community of Carmelites 10 years ago.

“I love visiting the people at St. Martin’s and celebrating the sacraments with them,” he said. “It’s very nice when the elderly come together and show such great spirit.”

Like many of those gathered for the celebration, Sister Delia Dowling, S.S.N.D., president of Sisters Academy of Baltimore in Lansdowne, said she was inspired to enter the consecrated life by the example of the School Sisters of Notre Dame who taught her at St. William of York School in Baltimore.

“I was inspired by their life of service,” said Sister Delia, a School Sister for more than 40 years. Ministering in education has allowed her to touch the lives of many children, Sister Delia said.

“It’s very satisfying to see the growth of students in their faith and in their life,” she said.

While the religious life is not without its challenges, many of those gathered said they find strength from living in community. They are optimistic about the future of religious life.

“Young people want to give themselves totally,” said Sister Elizabeth Anne, noting that her order of Dominicans has 230 sisters, with a median age of 34.

Brother John Doyle, C.F.X., a Xaverian who works in adult education at St. Mark, Catonsville, said it was encouraging to see so many men and women religious come together for the World Day for Consecrated Life.

“It’s a good thing,” he said. “But it represents only a fraction of the folks out there doing good work every day.”