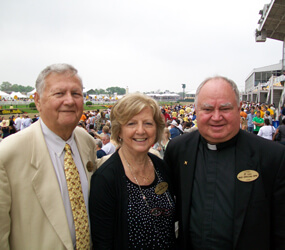 Black-Eyed Susans and the singing of “Maryland My Maryland” are among the more obvious traditions at the Preakness, the middle leg of thoroughbred racing’s Triple Crown.

Less well-known but considerably more vital to a smooth third Saturday in May at Pimlico are volunteers from St. Brigid in Canton and other Archdiocese of Baltimore institutions.

The Maryland Jockey Club has relied on St. Brigid to supply Preakness Day ushers since 1989.

The effort has come to enlist the Knights of Columbus, Catholic schools and other parishes, as the Catholic Community of St. Michael/St. Patrick in Fells Point supplied 54 of the more than 360 “hosts” stationed throughout the grandstand May 16, when Rachel Alexandra became the first filly since 1924 to win the race.

The custom can be traced to some Fells Point connections made nearly 50 years ago by Father Joseph G. Bochenek, the pastor of St. Brigid.

“My pastor at St. Patrick on Broadway years ago was Father Casimir Keydash,” Father Bochenek said. “I was friends with a nephew of his, John. When John retired from the Navy, he took a job at Pimlico.

“The track had been going to College Park (the University of Maryland) for Preakness day ushers, but too many of those kids wound up in the infield. John was asked if he knew any non-profits, one thing led to another, and here we are.”

Bette Brocato, the pastoral associate at St. Brigid, and her husband, Lou, organize the effort and acknowledge longtime partners like the Knights of Columbus, in particular the James Cardinal Gibbons Assembly 379, based at St. John in Westminster.

“Bette coordinates ushers for one half of the track,” Lou Brocato said, “and Rich Nestor handles the other half.”

“I’ve got from here to Rogers Avenue,” said Nestor, a fourth-degree Knight who has been working the Preakness since 1993. “We usually get about 30 guys from our Knights assembly (379). It’s fun, and it supplies funds to our charitable arms.”

The Maryland Jockey Club, which operates Pimlico, pays St. Brigid to organize the ushers. The parish, in turn, forwards $60 for each volunteer from outside St. Brigid to the cause represented by that person. If a school sends 30 volunteers, for instance, the effort turns into an $1,800 fundraiser.

It’s been a bargain for the Maryland Jockey Club, whose parent company, Magna Entertainment Corp., has filed for bankruptcy in response to a troubled racing industry in Maryland. It handles a few thousand fans on a typical day, as opposed to the 77,850, according to race officials, who attended the Preakness.

More goodwill ambassadors than security detail, the archdiocesan workforce has never worked the infield, where youthful excess led to a 2009 ban on bring-your-own alcohol and an attendance drop of more 34,000 from last year.

Volunteers are supplied a uniform shirt and hat; transportation; an exacta ticket on the Preakness; food and drink; and a fringe benefit, fellowship.

“We won’t make it home until 8:30,” said Hood, who has a second- and fifth-grader at St. John Regional and an 11th-grader at St. John’s Catholic Prep. “Your feet are going to hurt, but everyone is in a great mood. Where else can you go, not have to invest any money and get a return for your school?”

His regulars include Karen Maduschke, the mother of four students at St. John Regional.

“I’ve been out here eight years and become friends with a lot of fans,” Maduschke said as she worked section 40 of the apron, the area between the outside rail and the grandstand. “I trade e-mails with Peggy.”

Peggy Peroutka, a parishioner of the Catholic Community of St. Francis Xavier in Hunt Valley, has been a Preakness patron for two decades, and Maduschke has become a part of her experience.

“I look forward to seeing Karen every year,” Peroutka said.

While major league sports have become a homogenous experience with a corporate feel, archdiocesan volunteers add to the quirky nature of the Preakness.

Volunteers are asked to display a photo ID, and Nestor packs one from college that is more than 30 years old. Thirty-eight years to the day that he celebrated his first Mass, Father Bochenek checked tickets and continued a running gag.

“People ask me to bless their bets,” he said. “I look at their horses, and tell them they don’t need my blessing, they need a miracle.”

Father Bochenek is known as the “Preakness priest” and Maduschke is recognizable as the “Dancing Usher.” If you didn’t notice that on her shirt, all you had to do was catch her happy feet.

Repeat fans near the finish line are on a first-name basis with St. Brigid parishioners Louis Blasetti and Mark Smith.

“The only year I missed was 1992, when my daughter Stephanie was born,” Smith said.

Now Stephanie, a junior at The Catholic High School of Baltimore, is a volunteer.

“We were asked to supply 350 volunteers, and we brought 369 today,” Bette Brocato said, of an effort that has mushroomed from a single parish to nearly every corner of the archdiocese.

Despite an uncertain future for the Preakness, she wants to continue the tradition.

“This was our last contract to provide ushers,” she said, “but we hope to continue being what we call ministers of hospitality.”