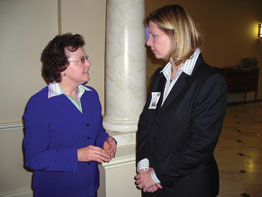 ANNAPOLIS – Leaders from the Archdiocese of Baltimore are urging state lawmakers to pass a bill requiring law enforcement agencies to notify nonpublic school superintendents or principals when one of their students is arrested for a serious crime.

Testifying in support of House Bill 75 during a Jan. 17 hearing in the House of Delegates Judiciary Committee, Alison D’Alessandro, archdiocesan director of the office of child and youth protection, said the measure is needed to help promote the safety and well-being of children.

The proposed law is identical to one that already applies to public schools, informing public school leaders when their students commit crimes like assaults, fire arms violations, sex offenses and bomb threats.

Noting that studies have shown that 40 percent of offenders are children or adolescents, Ms. D’Alessandro said the bill would provide school administrators information they need to help protect students and faculty.

“Children who may abuse other kids are acting out because they are being physically, sexually or emotionally abused themselves most times,” said Ms. D’Alessandro, noting that school leaders would work to get help for children who are reported for offenses.

“They can’t get the help they need if we don’t know they have a problem,” she said.

“It is our presumption that the exclusion of our school community from these notification requirements is simply an oversight in current law,” said Ms. Russell, noting that the reporting law would also apply to a student transferring to a nonpublic school who has been convicted of a serious offense.

Testifying in support of the bill, Stephen H. Guthrie, assistant superintendent of Carroll County public schools, pointed out that in the last two years, there have been 100 reportable offenses in the county. They included 39 weapons violations, 11 sex offenses, nine first-degree assaults and one assault with intent to murder.

“Knowing these events from police reports is better than knowing from rumors we can’t verify,” he said.

Mr. Guthrie said the reportable offense law “allows public schools to be proactive rather than reactive when notified of certain criminal activities alleged by a student.”

Del. Tanya Shewell, a Carroll County Republican who is sponsoring HB 75, told The Catholic Review she is confident the bill has strong support. The measure has more than 40 cosponsors from both political parties, she said.

The Maryland State Teachers Association, Rabbi Hershel Lutch of the Torah School of Greater Washington and John W. Storey of the Association of Christian Schools International were among the others offering oral or written testimony in support of the bill. No one testified against the measure.