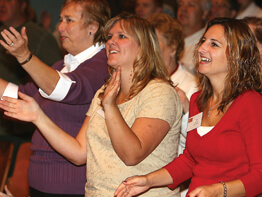 You gotta move – especially when ValLimar Jansen sings and speaks in a way that gets you on your feet.

Ms. Jansen, the keynote speaker at this year’s Archdiocesan Institute, brought her Broadway-caliber soprano and considerable performing arts experience to the Oct. 13 event.

The theme of this year’s Archidocesan Institute was “When the Lord’s Ready You Gotta Move, El Señor esta listro, bienes que moverta. Ms. Jansen, who in 2005 released a solo collection entitled “You gotta move” infused her talk with songs. Backed by a keyboard player and energetically moving about the stage, she captured the audience with a theater-like performance. She is known for her gospel, contemporary Christian and jazz style singing, has sung professionally in several countries and played Beneatha in the Broadway touring cast of “Raisin.”

The crowd of about 600 responded enthusiastically with laughter, clapping and toe-tapping.

“This is the day the Lord has made; I will rejoice and be glad,” Ms. Jansen said.
“Anybody out there glad about something? Sometimes as Catholics – and I see a lot of this at Mass – we may be glad, but we need to inform our face.” The line got a big laugh, as did her demonstration of what she called “a drive-by” passing of the peace, with a perfunctory handshake and little contact. “When I hug you, I am exchanging my heart energy with you,” she said. “It’s a wonderful opportunity to actually give peace to someone.”

Her songs and stories conveyed four key points: “God created us – God is our God and creator and we are created in the very image of God, something we forget. God gives each of us something very specific and unique to accomplish in this world. Christ sent us power from on high to accomplish that which God has give us to do on the earth. We are capable of making a major impact on this world.”

She then told the crowd, “I am a Roman Catholic and I am proud of it. I have to remind my Roman Catholic brothers and sisters that we are biggest denomination in the United States and we walk around like we’re the smallest – 77 million Catholics!”

She received an enthusiastic standing ovation from the crowd, which demanded she come back for an encore.

“She was awesome,” said Patty Rupert from St. Anthony of Padua/Most Precious Blood, Baltimore, who teaches at St. Mark School in Catonsville. “If only she could come to all of our parishes and all of our schools and teach us how to praise the Lord.”

In his opening remarks, Bishop W. Francis Malooly, western vicar, told the audience to think about how they share their faith. “I would challenge you in how you pass it on,” he said. “Be holy, be joyful, be the face of Jesus.”

The Archdiocesan Institute offered four sessions of workshops designed to help those in any form of ministry do just that.

Workshop topics ranged from “Confessions of a Guilty Bystander: Moving from Contemplation to Service” to “Jesus Was a Thirtysomething: Developing a Preferential Option for Young Adults” to “Adult Faith Formation: Trends, Tensions and Tactics.” Whether it was information on ministering through art, the history of the Baltimore Catechism or how to handle children with special needs, the Archdiocesan Institute offered a workshop on it, and several workshops were offered in Spanish.

Valerie Anderson, from St. Bernardine, Baltimore, said she has attended the Archdiocesan Institute for years because she enjoys “the fellowship with others who are youth ministers.” She was drawn this year by a workshop given by Wayne Hipley from St. William of York, Baltimore, titled “Untangling the Web” about MySpace, YouTube, the Internet and how they impact youth. “That’s how I communicate with them,” she said.

Sue Driscoll from St. Mary, Annapolis, said she, too, chose that workshop, which filled every seat, “because I teach middle school students and they talk about these things.” She was intrigued to learn if she could use MySpace in her classroom, but decided it wouldn’t work in her present setting.

Marie Wainwright, from Holy Trinity in Glen Burnie, attended a workshop presented by Lorene Hanley Duquin from New York titled “When Catholics Don’t Go to Mass.
“She had a lot of information, and I’m proud of my parish because we do everything she suggested,” Ms. Wainwright said, adding “I think I came out with a way or two to reach people.”