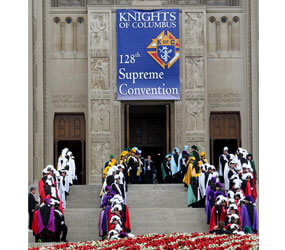 WASHINGTON – Knights of Columbus are called to evangelize, to be charitable and to serve as instruments of God’s love, Washington Archbishop Donald W. Wuerl said Aug. 3 at a Mass opening the Catholic fraternal organization’s 128th annual supreme convention.

“We are to be heralds of the Gospel of life – from conception to natural death; witnesses to the splendor of truth – that there is an objective right and wrong; ministers of the sacrament of charity,” Archbishop Wuerl said in his homily.

More than 4,000 Knights of Columbus and members of their families packed the Basilica of the National Shrine of the Immaculate Conception for the Mass.

“In quiet contradiction to all of the other lifestyles, options and opinions, we are to be champions of the new evangelization,” Archbishop Wuerl said. “(We are) empowered to be, through our words and deeds, through our proclamation and acts of charity, a sign – a living sign, visible sign and effective sign – of the risen Christ present in our world.”

He reminded the Knights that “God’s love made manifest in Christ is supposed to be reflected, shared in our care for one another. We are our brother’s keeper.”

“The very origins of our order are rooted in the recognition that we are called to exercise a ministry of service and charity,” Archbishop Wuerl said.

The Knights were meeting Aug. 3-5 in Washington. The Mass – concelebrated by eight cardinals, more than 70 bishops and more than 120 priests – was the official start of the annual gathering.

Knights came from throughout the country and as far away as Canada, Mexico, Cuba, Dominican Republic and Poland.

Archbishop Wuerl told the Knights and their family members to be “children of the God who is love and who calls us to manifest our love for him and our love for others.”

Referring to Pope Benedict XVI’s recent creation of the Pontifical Council for the New Evangelization, Archbishop Wuerl asked the Knights to manifest Christ’s love to the “highly secular culture in which we live, with its focus almost entirely limited on material things and overly and overtly individualistic.”

“All around us are those who need to hear all over again – maybe for the first time with true appreciation – that Jesus is Lord, that the risen Lord is with us today, and that his Gospel is the path of both truth and life everlasting,” he said.

Christopher Kernan, the general program director for the Florida state council of the Knights of Columbus, said Archbishop Wuerl’s call for the Knights to evangelize is something that he can relate to personally.

“I was out of the church for 35 years. When I came back, I found in the Knights a group of men who had shared a common religion,” Kernan told the Catholic Standard, newspaper of the Washington Archdiocese. “If you become an active member of the Knights of Columbus, you can’t help but become more active in the church. And when you have a deeper faith, you naturally reach out to others.”

He called the annual gathering of the Knights “a wonderful experience where you can talk to the other guys and celebrate Mass with guys from all over the world.”

John Winfrey, the provincial marshal for Maryland’s Calvert province, said it was appropriate to open the convention with Mass at the national shrine.

“We gather in Mary’s home to show our dedication to the church and to Mary, the queen of the Knights,” he said. “Pope John Paul II called us ‘the strong right arm of the church,’ and that is a title we hold dear.”

Robert Holstein of Burnsville, N.C., was attending his first convention. A Knight for just six weeks, he said has learned that “nobody is a stranger. Whether you have been a Knight for six weeks or 45 years, these are some of the most friendly people you will find.”

Looking over the more than 4,000 people gathered at the shrine, Holstein noted that he comes from a small parish of only 40 families.

“I have never seen as many Catholics gathered together,” he said. “I like the idea that we are committed to charity and giving back to our communities. The Holy Spirit led me to become a Knight. It was the right decision.”