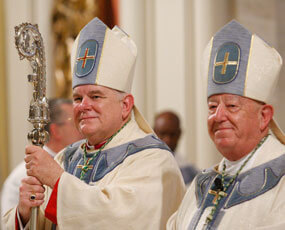 MIAMI – The deluge let up just as the festivities began.

On a rain-soaked June 1 – the first day of the hurricane season, as the archbishop himself noted – this descendant of Polish immigrants – a man born during a hurricane – became the first native son to take the staff as chief shepherd of south Florida’s 1.3 million Catholics.

“Hopefully, this is not a prophecy,” Archbishop Wenski joked as the rains fell earlier in the day, during a brunch for bishops, friends and family members that preceded the installation Mass.

The downpours reminded Father John McLaughlin, a retired archdiocesan priest, of the days of the late Archbishop Edward McCarthy, whose tenure as Miami’s second archbishop seemed always to be “blessed,” as he put it, by rain.

It was obvious, however, as he stepped onto the drenched red carpet leading up to the cathedral doors, that Archbishop Wenski will add his own inimitable touch to his tenure in Miami: He will not mince words and he will have plenty to say.

An outspoken advocate of immigrants and human rights since his days as a priest among Miami’s Haitian community, the new archbishop paused for impromptu news conferences both before making his way into the cathedral and afterward.

One cardinal, two papal nuncios and more than 30 bishops from the United States and Latin America took part in the installation Mass for Archbishop Wenski, 59, who succeeds Archbishop John C. Favalora.

The papal nuncios were Archbishop Pietro Sambi, who represents the Vatican in the United States, and Archbishop Bernardito Auza, the Vatican’s representative in Haiti.

Perhaps more significant – and a testament to Archbishop Wenski’s consistent involvement throughout the hemisphere – was the presence of 10 Haitian and five Cuban bishops.

He preached his homily in fluent English, Spanish and Creole – the three languages he learned while growing up in Lake Worth, attending the seminary in Miami and working as a priest in Little Haiti.

He urged south Florida’s Catholics to “involve themselves in the public square and do so coherently and unapologetically.”

The archbishop, who until being named to Miami had headed the Diocese of Orlando since 2004, told them that “the sins” that weaken the Catholic Church from inside can only be healed by conversion, by focusing on “no other treasure but that: the gift of encounter with Jesus Christ.”

He summarized the church’s social justice teachings in five words: “No man is a problem,” adding, “When we see another human being as a problem, we often give ourselves permission to look for expedient but not just solutions.”

He also told Miami’s Catholics, buffeted in recent months by financial woes that forced the merging of parishes, the closings of schools and the shuttering of ministries, not to “feel sorry for ourselves. Our brothers and sisters in Haiti, Cuba and elsewhere have challenges much more daunting than our own – with far less resources than we have.”

“We begin a new chapter in the history of this local church,” Archbishop Wenski concluded, “and so, this is the time for us all – priests, deacons, religious and members of Christ’s faithful – to assess our fervor and to find fresh enthusiasm for the spiritual and pastoral responsibilities that lie ahead of us. … Let us start afresh from Christ.”

In an interview with the Florida Catholic, Miami’s archdiocesan newspaper, Father Gene Gaetan of the Diocese of Jacmel, Haiti, said the new archbishop is “for us, a great defender, a great advocate.” He noted that Archbishop Wenski supports “all the episcopal conference of Haiti, at all levels, economic and pastoral.”

“We can say he’s a Haitian-American bishop,” Father Gaetan said.

“He was the one who made himself present in the cities, and there began a relationship that has continued,” said Bishop Emilio Aranguren of Holguin, Cuba, referring to the aftermath of Hurricane Lilly in 1996, when then-Father Wenski, as director of the archdiocese’s Catholic Charities, delivered tons of aid to the Cuban people by partnering with Caritas Cuba.

Bishop Aranguren, who said he also attended the ceremony as a representative of CELAM, the Latin American bishops’ conference, noted “how many emigrants from the countries of CELAM have been welcomed in Miami.”

He added that the welcome had been beneficial to the church in both continents: “At the same time we are welcomed, we share our wealth, our popular, simple faith which is a means of evangelization.”

Bishop Manuel Valarezo of the apostolic vicariate of the Galapagos Islands described Archbishop Wenski as “a man who is very interested in helping poor peoples and missions.”

The Galapagos is a province of Ecuador with 30,000 inhabitants, 20 percent of whom are Catholics, Bishop Valarezo said.

He explained that Archbishop Wenski became involved with the Galapagos through his longtime friend and seminary classmate, Father Daniel Kubala, pastor of St. Thomas the Apostle Parish in Miami, who helps sustain a number of church projects there.