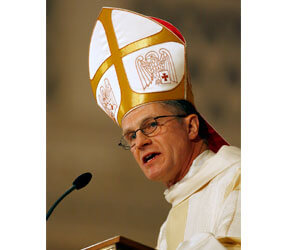 WASHINGTON – Archbishop Timothy P. Broglio of the U.S. Archdiocese for the Military Services has urged Congress not to repeal the policy banning gays from openly serving in the military.

“Sacrificing the moral beliefs of individuals” in response to “merely political considerations is neither just nor prudent especially for the armed forces at a time of war,” he said in a statement posted June 1 on the archdiocese’s website.

He said Catholic military chaplains have expressed concern about the possible repeal of the 1993 legislation widely known as “don’t ask, don’t tell” and have requested guidance about what to do if it is lifted.

The archbishop said the effect “has the potential of being enormous and overwhelming” and stressed that “nothing should be changed until there is certainty that morale will not suffer.”

On May 27 the House of Representatives endorsed an amendment that would repeal the ban in a 234-194 vote. In a closed session, the Senate Armed Services Committee endorsed the proposal, but the measure still faces a vote in the full Senate.

The proposal to lift the ban is attached to a Department of Defense spending bill. If passed, it would not go into effect until the Pentagon completes a study, expected in December, on the ramifications of such a policy change and until the president, secretary of Defense and chairman of the Joint Chiefs of Staff certify that the ban’s repeal would not impact the military’s ability to fight.

In the June 1 statement, the archbishop reiterated church teaching on homosexuality as defined by the Catechism of the Catholic Church. According to the catechism, “homosexual acts are intrinsically disordered” but homosexuals must be “accepted with respect, compassion and sensitivity. Every sign of unjust discrimination in their regard should be avoided.”

The catechism also says “homosexual persons are called to chastity” and should “gradually and resolutely approach Christian perfection.”

In light of this teaching, he said Catholic chaplains “must show compassion for persons with a homosexual orientation, but can never condone – even silently- homosexual behavior.”

Archbishop Broglio said those in the military “with a homosexual orientation can expect respect and treatment worthy of their human dignity.”

“However, unions between individuals of the same gender resembling marriage will not be accepted or blessed by Catholic chaplains.” He also noted that “no restrictions or limitations on the teaching of Catholic morality can be accepted” and that “First Amendment rights regarding the free exercise of religion must be respected.”

He said a repeal of the law – which prohibits homosexual activity in the military but eliminates sexual orientation as grounds for dismissal – might have “a negative effect on the role of the chaplain not only in the pulpit, but also in the classroom, in the barracks and in the office.”

The archbishop, noting that gays already serve in the military, questioned if the repeal would “authorize these individuals to engage in activities considered immoral not only by the Catholic Church, but also by many other religious groups” and if it would cause changes in living conditions.

Archbishop Broglio also questioned the effect of lifting the ban on the overall morale of the troops.

He said the military must find ways to promote moral behavior and “develop strong prohibitions against any immoral activity that would jeopardize morale, good morals, unit cohesion and every other factor that weakens the mission. So also must a firm effort be made to avoid any injustices that may inadvertently develop because individuals or groups are put in living situations that are an affront to good common sense.”

The archbishop likened the “don’t ask, don’t tell” policy with the ways that alcoholics have benefited from Alcoholics Anonymous. “Like homosexuality, there is rarely a cure,” he said. “There is a control through a process, which is guarded by absolute secrecy.”