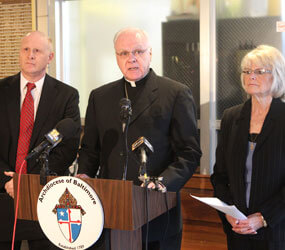 The Archdiocese of Baltimore is suing Baltimore City to overturn a controversial new law that requires the city’s pro-life pregnancy centers to post signs saying they do not provide abortion or birth-control.

Archbishop Edwin F. O’Brien announced the federal lawsuit March 29 at St. Brigid in Canton, site of a pro-life pregnancy center. The suit was filed in the U.S. District Court for the District of Maryland.

The archbishop said the law “clearly” violates the constitutional rights to free speech and the free exercise of religion.

The law was passed late last year despite a strong campaign against it from archdiocesan leaders and other pro-life advocates. It imposes a $150 daily fine on pregnancy centers that fail to post signs. The archbishop noted that it has become a model for similar efforts in jurisdictions across the country.

“The ordinance applies only to pro-life pregnancy centers,” Archbishop O’Brien said, “and thereby targets for speech regulation only one side of a contentious public debate.”

Archbishop O’Brien said the ordinance “runs directly counter to Maryland’s conscience clause, which protects the rights of Maryland’s citizens to refuse to provide or refer for abortions.”

The archbishop was joined in the lawsuit by St. Brigid and the Greater Baltimore Center for Pregnancy Concerns (GBCPC), which operates the pregnancy center at the parish. The GBCPC also operates another pregnancy center in the city and a third at St. Rita in Dundalk. A total of 1,000 women annually seek assistance at the three sites.

Carol Clews, GBCPC executive director, said her organization has complied with the law, posting signs in English and Spanish. Clewes pointed out that requiring the signs forces pro-life pregnancy centers to send out the “implied message” that abortion services are available elsewhere and should be considered. In violation of their moral and religious beliefs, she said, it requires pro-life pregnancy centers to “legitimize” abortion clinics.

Angela Page, coordinator of the pregnancy center at St. Brigid, said the law “targets and harasses” pro-life pregnancy centers because abortion clinics are not required to list what services they do not provide.

Lawyers from Gallagher, Evelius and Jones in Baltimore and The Catholic University Law School in Washington are providing free services in the fight to overturn the law. Thomas J. Schetelich, a Baltimore lawyer with Ferguson, Schetelich and Ballew and chair of the GBCPC’s board of directors, is also providing pro bono assistance in the effort.

“We strongly believe that this is very bad legislation and that it is an offense to the staff and the many volunteers of pregnancy centers who provide support and material assistance to vulnerable women and children,” Schetelich said. “Frankly, we would expect our city government to be supporting these sacrificial efforts rather than trying to hinder them.”

Schetelich contended that the law requires pro-life pregnancy centers to make statements that are untrue. Referring to the fact that the centers provide information on abstinence and natural-family planning, he said it was inaccurate to say they don’t provide birth control.

“(They) are recognized, medical forms of birth control,” he said.