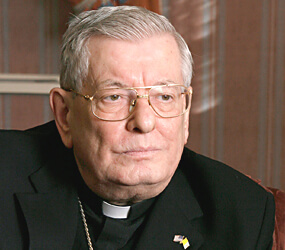 Italian Archbishop Pietro Sambi, the Vatican nuncio to the United States, died late July 27 at Johns Hopkins Medical Center in Baltimore after a hospitalization that began with lung surgery. He was 73.

On July 22, the apostolic nunciature in Washington announced that the archbishop had been “placed on assisted ventilation to attempt recovery of his lung function” two weeks after undergoing “a delicate lung surgery.”

A veteran Vatican diplomat, Archbishop Sambi was appointed as U.S. nuncio, or ambassador, in December 2005 by Pope Benedict XVI. Prior to the U.S. appointment, he had been nuncio to Israel and Cyprus; he was the second Vatican ambassador to Israel, after the Vatican and Israel established diplomatic relations in 1994.

After he arrived in the United States Feb. 24, 2006, he said in an interview with Catholic News Service in Washington that he was impressed by the vitality of U.S. Catholicism, the level of weekly Mass attendance among U.S. Catholics and their generosity toward others.

The archbishop was known for his warm and affable manner, sense of humor and being open and ready to listen to people.

Archbishop Sambi, a native of central Italy, was ordained to the priesthood in 1964. He was named an archbishop and nuncio to Burundi in 1985, a position he held for six years until being named nuncio to Indonesia. In 1998, Pope John Paul II named him nuncio to Israel and Cyprus and apostolic delegate in Jerusalem and Palestine.

During Pope Benedict’s April 2008 visit to the United States, Archbishop Sambi accompanied the pope and during the pontiff’s stay in Washington hosted him at the Vatican Embassy, or nunciature, where the pope held a historic private meeting with five victims of clergy sexual abuse.

Before the pope’s arrival, the archbishop said the pontiff was coming to “strengthen the faith, the hope and love of the Catholic Church in the United States,” adding that he hoped the pope’s visit would “bring a new wind of Pentecost … a new springtime” to the U.S. church.

Among honors the archbishop received was a Living Stones Solidarity Award in 2009. Bestowed by the Holy Land Christian Ecumenical Foundation, it honors those who have made “a sustained and extraordinary effort to love, support and stand in solidarity with the Christians in the Holy Land.” In May of this year, he was awarded an honorary doctor in public and ecclesial service degree from Jesuit-run Regis University in Denver.

During his U.S. tenure, Archbishop Sambi traveled throughout the country to attend the ordinations of bishops, celebrate Mass and participate in myriad events.

As a result he “understood and loved our nation,” said New York Archbishop Timothy M. Dolan, president of the U.S. bishops’ conference. The nuncio “enjoyed the highest respect and deepest affection” of the bishops and the nation’s Catholics, the archbishop said in a statement July 28.

Last September, Archbishop Sambi was the principal celebrant of a Mass marking the 13th anniversary of the death of Blessed Teresa of Kolkata, which coincided with the U.S. Postal Service’s issuance of a stamp bearing her likeness.

“This stamp looks almost like a holy card. I pray it may serve in some small way as a reminder of Mother Teresa,” Archbishop Sambi said. “May Jesus stamp upon our hearts the same spirit as Mother’s to love God, the church and the poorest of the poor more than ourselves.”

In 2009 at a 10th anniversary observance of the Joint Declaration on the Doctrine of Justification signed by Catholics and Lutherans, Archbishop Sambi told a Washington audience that today’s disciples of Jesus, like the first disciples, should be recognized by how they love each other and, guided by Jesus, they should walk together in a spirit of unity, mutual respect and brotherhood.

“Each act of unity is profession of faith in the Lord Jesus,” said the archbishop.

Around the same time, he spoke in Garrison, N.Y., at a centennial celebration of the reception of the Franciscan Friars and Sisters of Atonement into the Catholic Church.

Earlier that year, the archbishop hosted a reception at the Vatican Embassy for the Catholic Association of Latino Leaders, attended by hundreds as the group launched its first national outreach effort during Hispanic Heritage Month.

Pointing out the challenges faced by today’s priests and religious orders, the archbishop called the clergy abuse scandal “a horrible experience which has deprived all of us of our credibility before our faithful and before society.”

At the 2007 convention of the National Catholic Educational Association, he called teachers “the greatest artists of the world … because you sculpt the best of what you are, not in a piece of marble but in human beings who are the glory of God.”

“Each of us has forgotten a lot of what we were told in school,” he added, “but a lot of what’s inside is from the example of teachers.”

In his first remarks to a U.S. bishops’ meeting, in June 2006 in Los Angeles, he described them as “a people of great experience, great holiness and also great suffering.” He stressed the importance of evangelization and urged the bishops not to be disheartened by the clergy sexual abuse scandals that have plagued them in media headlines for the past four years.

In all his previous diplomatic posts from the Vatican, he said, he found that what is essential is faith in Jesus and the Gospel message of his resurrection.

To highlight the global role of the United States and the U.S. church, he shared with the bishops an anecdote from his time in Indonesia. He told of a Christmas he spent in a remote village there. In its street shops, he recalled, “I found Coca-Cola and Marlboros.”

In Washington, after he arrived as nuncio, he told CNS that in his travels as a papal diplomat, it was “difficult to find a part of the world where the charity of U.S. Catholics did not reach the poor or sick people.”

Before he departed Israel, the one thing he would have liked to have seen during his tenure in Jerusalem, he said, was the development of a larger and more aggressive interreligious dialogue to show “that the holy city of Jerusalem (unites) human beings, not divides them.”