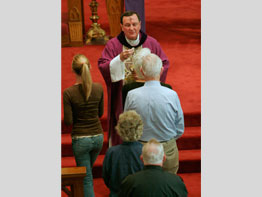 MOBILE, Ala. – Archbishop Thomas J. Rodi, a native of New Orleans who as bishop of Biloxi, Miss., was lauded for his leadership following Hurricane Katrina, was installed as the second archbishop of Mobile during a pageantry-filled liturgy June 6 at the Cathedral-Basilica of the Immaculate Conception.

The new archbishop thanked his predecessor for his welcome, his kindness and his encouragement in the aftermath of Katrina.

“I am delighted that you will continue to be a blessing to all of us in your ministry among us and, on behalf of all of us, please know you have our respect, our affection and our gratitude,” Archbishop Rodi said in his homily.

Despite sweltering heat, hundreds filled the historic cathedral-basilica for the 90-minute celebration.

Representatives of different faith communities also were in attendance.

In his homily, Archbishop Rodi remarked that the date of his installation coincided with the anniversary of D-Day, commemorating the Allied invasion of Normandy during World War II, and offered thanks to all veterans and those currently serving in the armed forces.

He prayed “that our military will always be a force of peace in our world.”

Archbishop Rodi, who will serve as apostolic administrator for the Biloxi Diocese until a new bishop is named, thanked the people of the diocese for “the privilege to serve” as their bishop and for their “example of strength, character and resilience in the face of adversity,” as well as for their faith, generosity and love for the church.

He also thanked his family, including his two sisters, Sheila Rodi Sullivan and Dottie Rodi Kightlinger, who were at the Mass.

Archbishop Rodi, who delivered a portion of his homily in Spanish, also touted the Archdiocese of Mobile’s rich diversity, calling it a “source of unity.”

That diversity was reflected in the liturgy, which included prayers and hymns in Spanish and Vietnamese.

Noting that Catholics are just a small percentage of Alabama’s population, Archbishop Rodi said, “When the Lord sent out his disciples, they were even a smaller percentage of the Roman Empire and he had confidence in them.

“With God’s help, serving with you and for you, I look forward that we, the people of the Archdiocese of Mobile, will be the yeast, the leaven of the Lord, in our beloved Alabama,” he said.

Those unable to attend the Mass at the cathedral-basilica watched the ceremony via closed-circuit video at a nearby theater.

Afterward, a line of well-wishers snaked around Cathedral Square for a chance to greet the new archbishop.

Harrietta Eaton believes Archbishop Rodi will be “a great archbishop.” A member of Prince of Peace Parish in Mobile, she said she had just moved back from Pascagoula, Miss.

“Any bishop who can go through Hurricane Katrina and revive our Catholic community in Mississippi is definitely an asset to the Archdiocese of Mobile,” she told The Catholic Week, Mobile’s archdiocesan newspaper.

Nnamdi Nnedu, a recent graduate of Auburn University and a member of St. Michael Parish in Auburn, said he was impressed with Archbishop Rodi’s outreach to the Archdiocese of Mobile’s different ethnic groups.

“I was impressed by his mastery of the different languages as he tried to communicate to the members who speak languages other than English in an effort to unite us,” Nnedu said.

He said he hoped Archbishop Rodi will become a familiar presence at all the parishes in the archdiocese.

The group of interfaith leaders at the Mass included the Rev. Rob Gulledge, pastor of Government Street United Methodist Church. He said it was a great day, not only for Catholics, but all believers.

“I see today as a passing of the torch and an opportunity for new dimensions in ministry, but, more than anything, today is a day for brothers and sisters in Christ to celebrate a grand occasion,” he said.

Mike Ladner, superintendent of education for the Diocese of Biloxi, said he had mixed emotions.

“Archbishop Rodi is a very, very good leader. We will miss that in the Diocese of Biloxi,” Ladner said. “He has brought us from ruins to a good position to move our Catholic schools forward – at least that’s where I’ve been working with him. I know the Archdiocese of Mobile is going to benefit from Archbishop Rodi’s stellar leadership. He’s a good leader. He’s a godly man.”