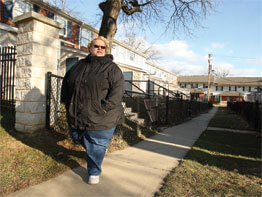 From the archbishop to parish priests to people in the pews – and especially, the people in the neighborhoods – Ronald Jackson’s death evoked horror, outrage and pleas for peace on the streets of Baltimore.

Ronnie had just stepped out the front door of his West Baltimore house to deliver grapefruits to an elderly neighbor when he was fatally shot Dec. 7.

His death came near the end of another year of bloodletting in a city that, despite a drop in homicides last year, remains among the most violent in America.

Archbishop Edwin F. O’Brien has consistently listed quelling violence among his top priorities – and has enlisted Auxiliary Bishop Denis J. Madden and a group of 11 urban pastors to help carry out that mission.

The Working Group on Peace in the City grew out of a daylong meeting last May of all the city’s pastors, along with city leaders, including Police Commissioner Frederick H. Bealefeld III and Dr. Joshua Sharfstein, health commissioner.

“This is a time when the people of God have to come together collectively,” said group member Father Donald A. Sterling, pastor of New All Saints, Liberty Heights. “In many ways, people feel powerless, afraid to come out at night. We’ve got to change the climate. There are no two ways about that, and the word of God offers a means to do that.”

The peace group has been meeting monthly to drum up ways to unite against violence and plans to convene a second citywide summit on violence in May that will include city and church leaders.

Among other efforts, group members say they’re particularly impressed with Safe Streets, which relies in part on ex-offenders to reach out to youths in East and South Baltimore to try to steer them away from violence. Outreach workers, along with faith leaders and community organizations, intervene in conflicts or potential conflicts and promote alternatives to violence.

Many who get swept up in the violence don’t even expect to live past their teen years, said Cathy McClain, program manager for the South Baltimore Safe Streets, which is run out of the basement of St. Veronica, Cherry Hill, where she is the youth minister.

“Safe Streets is designed to change the thinking of people involved in crime,” Ms. McClain said. “We’ve done law enforcement. We’ve never really done anything to change the mindset of the people directly.”

The peace group, which plans to work with other faiths, also is looking at mentoring for children of incarcerated parents; a gun buy-back program; continuing the prayer vigils (which began last year); and reaching out to crime victims, their families and violent youths.

“The big thing is we’ve raised the level of consciousness, and we hope that parishes will become more involved,” Bishop Madden said. “We have an obligation to work with our people and not only protect people, but work with all people in need. That’s why it’s so important to reach out to all people, even the ones who are perpetrators.”

Bishop Madden said the group plans to build on an effort started at New All Saints, which surveys parishioners to get ideas on stemming violence.

At New All Saints, Father Sterling said, youths have told of gang threats and complained that parents don’t spend enough time interacting with and nurturing them.

Capuchin Father Paul Zaborowski, pastor of St. Ambrose, Park Heights, knows firsthand the terror of being a crime victim. In October, robbers scaled a wall topped by a fence, kicked doors in, threatened friars and stole a laptop computer and a digital camera.

The robbery gave the friars empathy for victims in the crime-ridden neighborhood where violence, drug dealing and gangs run rampant, and hundreds of boarded houses and vacant lots pockmark the urban landscape.

“So many parishioners have stories to tell of being victimized – robbed, assaulted, burglarized,” said Father Zaborowski, a member of the peace group. “It’s just a reality, and sometimes you can feel powerless.

“But,” he said, “we must keep praying, keep giving hope, keep supporting one another. That’s what church is all about.”