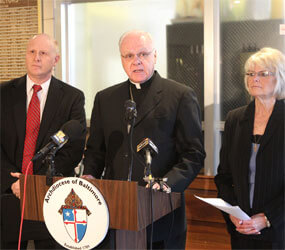 When Archbishop Edwin F. O’Brien was installed as the spiritual shepherd of the Archdiocese of Baltimore nearly four years ago at the Cathedral of Mary Our Queen, he made a simple pledge.

The archbishop kept his promise, devoting himself to taking on a wide range of significant challenges in the nation’s oldest diocese and beyond.

Promoting respect for life has been high on the archbishop’s agenda.

When the Baltimore City Council passed an ordinance in 2009 requiring the posting of signs at pro-life pregnancy centers stating that they do not provide abortion and birth control, Archbishop O’Brien challenged it in federal court. The archdiocese argued that such signs were a violation of First Amendment rights and that the law unfairly targeted pro-life pregnancy centers while no such signs were required of pro-choice centers indicating which services they don’t provide.

In a major victory for the archdiocese, U.S. District Court Judge Marvin J. Garbis ruled Jan. 28 in Baltimore that it is unconstitutional to require pro-life pregnancy centers to post signs with language mandated by the government.

“The Court holds that the ordinance violates the Freedom of Speech Clause of Article I of the Constitution of the United States and is unenforceable,” Judge Garbis wrote. “Whether a provider of pregnancy-related services is ‘pro-life’ or ‘pro-choice,’ it is for the provider – not the government – to decide when and how to discuss abortion and birth-control methods.”

Archbishop O’Brien, who has celebrated pro-life Masses at the Maryland March for Life, testified against the death penalty in 2008 – the first time he personally appeared before Annapolis lawmakers as leader of the Baltimore archdiocese.

Speaking before the Maryland Commission on Capital Punishment, the archbishop said Catholic opposition to the death penalty is consistent with the church’s respect for the sanctity of human life. He quoted from Pope John Paul II’s 1995 encyclical, “The Gospel of Life,” which calls for the defense of life from conception to natural death.

“Woven into the fabric of the (pope’s) exhortation was an appeal to end capital punishment – to stand against the killing of even those who have committed murder and, in so doing, have affronted God’s dominion and denied their own and their victims’ God-given humanity,” Archbishop O’Brien said.

Pope John Paul taught that “bloodless means” of punishment should be employed to protect society, the archbishop said, noting that such means exist in the form of modern prison systems.

Archbishop O’Brien called himself “a late-comer” in his opposition to the death penalty, having once believed it to be a deterrent. After listening to Pope John Paul preach against the death penalty during a 1999 visit to St. Louis, the archbishop said he experienced a “moment of conversion.”

The archbishop returned to Annapolis in 2009 to testify again in opposition to the death penalty. While lawmakers did not ban capital punishment, they passed restrictions that allow the death penalty in first-degree murder cases only when defendants are linked to the crime through DNA or biological evidence, videotaped evidence or a videotaped confession. It is considered one of the toughest sets of limitations on capital punishment in the nation.

The archbishop has continued to lobby for the complete elimination of the death penalty, most recently hosting a March 13 interfaith prayer service to pray for the end of capital punishment.

Archbishop O’Brien spoke out forcefully in the defense of marriage from the time he arrived in Baltimore – addressing the topic during his first Baltimore Red Mass in 2007, an annual gathering of legal and judicial leaders.

The archbishop encouraged Catholics to contact their lawmakers in opposition to a 2011 bill that would have legalized same-sex marriage in Maryland. The measure was effectively killed on the last day of the General Assembly when it was returned to committee after lacking enough votes for passage.

Two days before Gov. Martin J. O’Malley, a Catholic, announced he would sponsor same-sex marriage legislation in the upcoming legislative session, the archbishop wrote the governor a private letter July 20, urging the governor against “promoting a goal that so deeply conflicts with your faith.”

“Preserving the central role of the natural family unit has always been – and should continue to be – the reason why our government recognizes marriage as existing between one man and one woman,” the archbishop said.

The archbishop challenged the governor not to allow debate on the issue to be determined by “mere political expediency.” The archbishop’s letter was made public when O’Malley released his response to the archbishop publicly Aug. 4.

This year, the archbishop has come to the defense of the Maryland DREAM Act – a law passed during the 2011 General Assembly that allows certain undocumented immigrants to receive in-state college tuition under certain circumstances. The archbishop wrote about the issue in his column in The Catholic Review and has urged Catholics to support the measure when it comes up for referendum in 2012.

In his April 28 column, Archbishop O’Brien said students who would benefit from the DREAM Act are “making the right choices” in pursuing higher education.

“If we are to face the reality honestly, that these students are likely to remain in our country,” he wrote, “isn’t it in the best interests of all that they be encouraged to contribute positively to our society?”

Planning for the future

Faced with a Catholic school system with struggling enrollment and increased expenses, the archbishop implemented a consolidation plan in 2009 after a yearlong scrutiny of the educational system. Thirteen schools were closed and one was opened in an effort to stabilize the system after it endured two years of average declines of 1,200 students.

The archbishop commissioned a Blue Ribbon Panel of experts that made a series of recommendations that were incorporated into a strategic plan.

A newly established 23-member Archdiocesan Catholic School Board, chaired by Archbishop O’Brien, met for the first time in January and was tasked with overseeing the plan’s implementation. Following a national search for a new superintendent after the retirement of Dr. Ronald J. Valenti, the archbishop selected Dr. Barbara McGraw Edmondson to lead the school system.

The archbishop also enacted a parish planning process throughout the archdiocese to deal with declining Mass attendance and fewer priests. In Western Maryland, he approved a plan to unite five Cumberland-area parishes into a single faith community known as Our Lady of the Mountains. He also approved a plan to close St. Michael in Fells Point and relocate its bilingual faith community to Sacred Heart of Jesus in Highlandtown.

At the Catholic Center, the archbishop enacted cost-cutting measures, instituted furloughs and made staff cuts to deal with serious financial challenges.

Promoting religious vocations, Archbishop O’Brien instituted a “highways and byways” program through which he had dinner with young people in family homes throughout the archdiocese. The archbishop answered questions about the religious life and shared his own priestly experiences.

A strong proponent of adoration of the Blessed Sacrament, the archbishop encouraged parishes throughout the archdiocese to offer adoration – especially for the intention of religious vocations. He additionally asked that prayers for vocations be offered at every Mass during the general intercessions.

Archbishop O’Brien has appeared prominently on the international stage several times during the last four years.

Speaking in February 2010 to international leaders at the Global Zero Summit in Paris, the former head of the Archdiocese for U.S. Military Services said the path to the elimination of nuclear weapons will be “long and treacherous,” but humanity “must walk this path with both care and courage in order to build a future free of the nuclear threat.”

Archbishop O’Brien cited the Second Vatican Council’s condemnation of “total war” and the council fathers’ skepticism of “deterrence” as a way to lasting peace.

“Every nuclear weapons system and every nuclear weapons policy should be judged by the ultimate goal of protecting human life and dignity,” Archbishop O’Brien said, “and the related goal of ridding the world of these weapons in mutually verifiable ways.”

Pope Benedict XVI tapped Archbishop O’Brien to be part of a team sent to Rome and Ireland early this year as part of an apostolic visitation of Irish seminaries. The archbishop accompanied New York Archbishop Timothy Dolan and others to visit the Pontifical Irish College in Rome and Ireland’s St. Patrick’s College, Maynooth; St. Malachy’s College, Belfast; All Hallows College, Dublin; Milltown Institute of Theology and Philosophy, Dublin.

“This is a collaborative effort involving the bishops of Ireland in an attempt to review the past and present formation programs at the Irish seminaries in an effort to contribute to their spiritual health and growth, as well as an increase in priestly vocations,” Archbishop O’Brien said.

The archbishop drew international attention in 2009 when he raised grave concerns about the Legionaries of Christ religious order.

Concerned that the Legion stifles the free will of its members and lacks transparency, Archbishop O’Brien told its director general in Rome that he cannot in good conscience recommend that anyone join the Legionaries or Regnum Christi, its affiliated lay movement.

The archbishop’s action came in the wake of revelations that the late Father Marcial Maciel Degollado, founder of the Legionaries of Christ, fathered a daughter while serving as leader of the international religious order.

Pope Benedict XVI had previously removed the Mexican priest from public ministry in 2006, asking him to lead a life of prayer and penance after Father Maciel faced allegations of sexual abuse of seminarians and financial irregularities.

“It seems to me and many others that this was a man with an entrepreneurial genius who, by systematic deception and duplicity, used our faith to manipulate others for his own selfish ends,” Archbishop O’Brien said.

Archbishop O’Brien said he had grave concerns that the Legionaries foster a “cult of personality” focused on Father Maciel.

“While it’s difficult to get a hold of official documents,” Archbishop O’Brien said, “it’s clear that from the first moment a person joins the Legion, efforts seem to be made to program each one and to gain full control of his behavior, of all information he receives, of his thinking and emotions.”

The archbishop said many members who leave the order suffer “deep psychological distress for dependency and need prolonged counseling akin to deprogramming.”

The archbishop directed the order’s leader to appoint a liaison who would inform the archbishop of all of the Legionaries’ activities within the archdiocese. He also asked for more transparency of Regnum Christi programs and for the order to stop giving spiritual direction to minors.
Click here for information about Archbishop O’Brien’s appointment to a post in Rome.