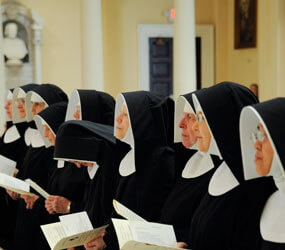 Ten members of a formerly Episcopal order of nuns made history Nov. 1 when Archbishop Edwin F. O’Brien received their religious community into the Catholic Church as a diocesan priory.

During a Mass at the Basilica of the National Shrine of the Assumption of the Blessed Virgin Mary in Baltimore, the Catonsville-based All Saints Sisters of the Poor professed their perpetual vows of poverty, chastity and obedience. The order is the first formerly Episcopal religious community to become Roman Catholic.

“What a great day, what a gift this day is for the Church of Baltimore,” said Archbishop Edwin F. O’Brien, noting that few bishops have the opportunity to lead a service like the one he celebrated at the basilica. “For each of you as well, sisters, this is a momentous hour in a long journey of faith.”

Most of the sisters joined the Catholic Church in 2009 after a seven-year period of discernment, with one other joining this year. One elderly sister decided to stay in the Episcopal Church, but lives in community and ministers with the All Saints Sisters of the Poor.

Although the sisters became Catholic and took private religious vows at the time of their entrance into the Church, their order was not officially recognized by the Holy See as Catholic until this fall. As a diocesan institute, the sisters will have a special relationship with the archbishop of Baltimore.

During the Nov. 1 liturgy, which attracted numerous religious sisters from across the archdiocese, Mother Christina Christie, superior of the All Saints Sisters of the Poor, pronounced her vows. One by one, her fellow sisters read a formula of profession to the superior and signed the profession register on the altar.

Archbishop O’Brien presented each sister a copy of the order’s newly written Constitutions and Directory.

At the end of the Mass, as the joyful strains of Handel’s “Water Music” resounded inside the basilica, the sisters seemed equally ebullient as they accepted applause, hugs and well wishes.

“I’m overwhelmed,” said Sister Margaret Muraki. “It’s such a welcoming and there’s so much love behind all of this.”

Mother Christina noted that her order is now permitted to welcome new members and has already received 15 inquiries.

“It’s about four to five who are serious possibilities,” Mother Christina said, noting that a Benedictine sister has also begun the process of transferring her vows to join the All Saints Sisters of the Poor.

The American branch of a society founded in England, the All Saints Sisters of the Poor came to Baltimore in 1872 and have been at their current location since 1917.

The sisters offer religious retreats and maintain a Scriptorium where they design religious cards. They visit people in hospice care and lead an active prayer life – worshipping together six times a day.