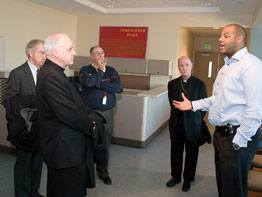 As Archbishop Edwin F. O’Brien toured the facilities of three Catholic Charities programs Jan. 4, the prelate said he was most impressed with the efforts of volunteers.

Archbishop O’Brien said he was impressed not just by their numbers, but by their attitudes.

“It’s obvious they get a tremendous amount of joy in their work. They want to be here, and it spreads to the clients they serve,” he said.

The archbishop toured the Baltimore programs of My Sister’s Place, Our Daily Bread and the Hispanic Apostolate with Harold A. Smith, Catholic Charities’ executive director. Archbishop O’Brien spoke with the directors of each facility and got a feel for how all of the organizations operate on a daily basis.

He walked through the small Mulberry Street facility of My Sister’s Place – a day program for women and children who are homeless – which is expected to relocate in August to the former Our Daily Bread building on Cathedral Street.

“We’re very excited about it,” Tracy L. Pindell, director of My Sister’s Place, told the archbishop. “We served 1,500 women and children last year, have 12 people on staff and a slew of volunteers. The new space will be a great asset.”

Though it wasn’t the archbishop’s first visit to the three-story Our Daily Bread building that opened last spring, it was the first time he received the grand tour, complete with details about the services offered to individuals who are homeless, hungry, addicted to drugs, formerly incarcerated or in need of job skills.

He saw parishioners from St. Mark, Catonsville, prepare the dining room to serve the homeless the daily meal, volunteers working with the unemployed in the work readiness programs and viewed the classroom and living quarters of Christopher Place Employment Academy – a yearlong residential program designed to give formerly homeless men support for independent living, job training and substance abuse rehabilitation skills. He also learned about the Maryland Re-entry Partnership housed in the building, which works with newly released convicts to reduce the pattern of re-incarceration.

As he passed by the computer lab, Archbishop O’Brien quipped that he, too, could benefit from the technology training programs.

Some 10,000 volunteers annually assist in the many programs offered in the Our Daily Bread building, said Dennis M. Murphy, director of Our Daily Bread.

On the day of the archbishop’s visit, there were 50 employees in the building and about 45 unpaid workers.

Archbishop O’Brien toured the second floor of the Hispanic Apostolate in Fells Point, which is under construction to transform it into a new medical health care facility for immigrants, as well as the first-floor English as a Second Language facility. He also saw the immigration legal department assisting foreign nationals.

The archbishop was told 75 percent of Hispanic Apostolate clients are Latino – 50 percent of whom come from Mexico – and the other 25 percent are citizens from other nations throughout the world.

“There are great needs in the community for our services,” said Cynthia Fickes, director of the Hispanic Apostolate. “About 3,000 new immigrants come here to our facility each year.”

The purpose of the morning tour was to familiarize the archbishop with the generous help Catholic Charities and other Catholic organizations provide the disadvantaged throughout the Archdiocese of Baltimore.

“The dedication in these vast organizations is impressive,” Archbishop O’Brien said.