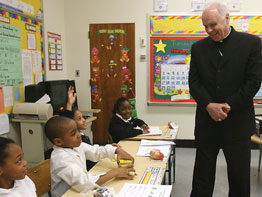 Three-fourths of Irvetta Lewis’ third-grade class at St. Katharine, Baltimore, raised their hands when asked if they had been nervous while reciting their greeting in unison to Archbishop Edwin F. O’Brien on his first stop of a three-school tour Feb. 26. Yet six eighth-grade student ambassadors, sitting with the archbishop in casual conversation at the Queen of Peace Cluster school, handled his questions like pros.

In the format of classroom visits, one-on-one with students, and conversations with principals, faculty and staff, Archbishop O’Brien had his first opportunity to take a closer look at the Partners in Excellence Inner City Scholarship Program (PIE), created to make Catholic schools a viable choice for Baltimore City families who otherwise couldn’t afford tuition.

“I know you’re applying the education you’re getting here,” he told the six students as they described their participation in their churches, weekend activities and dreams for the future. “This is a very important time in your life.”

Flanked by Dr. Ronald J. Valenti, superintendent for Catholic schools in the Archdiocese of Baltimore; Patrick Madden, the new executive director of development for the archdiocese; Jennifer Hammand, director of major gifts for the development office for the archdiocese; and Matt Anthony, PIE program coordinator, the archbishop patiently listened to students’ answers, songs, salutations and spelling words in various classrooms. He accepted a white piece of paper from Father Charles Hall first-grader Amadi Turner, who wrote “I love you” next to a stick figure.

Since its inception in 1996, PIE has provided 18,500 scholarships worth more than $17 million, and has raised more than $24 million for scholarships. PIE serves 20 inner-city Catholic schools with a total of 4,460 students; 2,270 have received PIE scholarships.

Funding for the program comes primarily from businesses, foundations and individuals with strong connections to Baltimore City.

The archbishop’s common underlying message to students was to acknowledge their parents and grandparents for making sacrifices to send them to Catholic school.

What they do there, they bring home, he said of the youngsters – the majority of whom are not Catholic.

“I have had teachers come for interviews,” said Kathleen Filippelli, principal of Father Charles Hall, “see the school and the neighborhood, and keep on driving.”

In spite of the location, she pointed out proudly that her staff is mostly long-tenured; several have been on staff for more than 20 years.

“Quite a story,” said the archbishop after listening to the principal’s description of the school’s accomplishments and mission.

PIE schools maintain a list of successes which includes no measurable dropout rate and a daily attendance rate of more than 95 percent.

Loyola is in its second year of involvement with St. Mary’s, sending 90 students to work one-on-one with the children.

Sean Caine, communications director for the archdiocese, said Archbishop O’Brien’s school tour was “an orientation for him to see firsthand how schools are operating, to see the great work they are doing, and meet the people who are making it happen.”

PIE is on schedule, “if not slightly ahead,” he said, for the Weinberg grant, a program highlight from the Harry and Jeanette Weinberg Foundation, which pledges matching grants of up to $3.5 million over the next several years. This new partnership hopes to increase student enrollment by an additional 500 children. For every one dollar donated to PIE, the Weinbergs will match it.

Piece by piece, PIE makes Catholic school a reality for many underprivileged students.

Sitting on a small blue chair on the right side of the archbishop, a shy fifth-grader shared his feelings about his former neighborhood public school, which “got on my nerves,” said Dionte Davis. “I can’t learn in an atmosphere of fighting and screaming.”