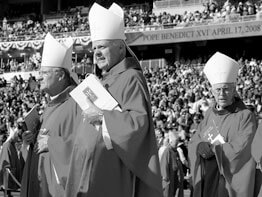 Calling Pope Benedict XVI’s April 15-20 visit to the United States a moment of “renewal” for the Catholic Church in this country, Archbishop Edwin F. O’Brien said the pope has given Americans much to ponder and pray on in the coming weeks and months.

The visit was a special honor for the Archdiocese of Baltimore, he said, with the pope highlighting the archdiocese’s historic importance as the first diocese and archdiocese in the United States.

At the beginning of his April 17 homily at the Mass at Nationals Park in Washington, D.C., the pope acknowledged the 200th anniversary of the raising of the Baltimore diocese to archdiocesan status. He more formally celebrated the anniversary at the April 20 Mass at Yankee Stadium in New York, along with the bicentennial of the establishment of the New York, Boston, Philadelphia and Louisville, Ky., dioceses.

“There was a great sense of pride and gratitude and appreciation the pope would celebrate with us,” said Archbishop O’Brien, who was seated just 15 feet from the Holy Father during the New York stadium Mass. “He reminded us that we have a great history and a great foundation.”

The archbishop said he was inspired by the pope’s encouragement of Americans to build on what they have already achieved in spreading the Gospel and reaching out to the poor and vulnerable.

“We still have people in our own society who are hurting,” he said. “There’s more to be done.”

In addition to attending the two stadium Masses in Washington and New York, Archbishop O’Brien was present for an April 16 White House welcome of the pope and a papal meeting the U.S. bishops in Washington that same day. On April 19, he attended Mass at St. Patrick’s Cathedral in New York and a youth event at St. Joseph Seminary in Yonkers, N.Y..

The pope showed strong leadership in meeting with victims of clerical sexual abuse and in directly confronting the abuse issue several times during his visit, Archbishop O’Brien said.

“His willingness to address the sexual scandals was good and necessary and I would hope that that does not distract us from all the other good things he’s done as well,” Archbishop O’Brien said.

The pope’s emphasis on treating people with dignity and his discourse on freedom are other critical areas for discussion, the archbishop said.

“He helped us see that freedom is something we exercise not for our benefit,” said Archbishop O’Brien, lauding the pope for helping Catholics remember they “have a responsibility to sacrifice themselves for others.”

Having a chance to observe the solemn and prayerful way the pope celebrated the liturgy, Archbishop O’Brien called Pope Benedict “deeply involved in the mystery when he prays.”

“He’s a deeply prayerful individual and his life is fostered and led in prayer,” the archbishop said.

Archbishop O’Brien said the pope connected with people in a personal way. That was especially evident at the youth event at St. Joseph when the pope talked about his own teen years when he was forced to enroll in Hitler Youth but soon stopped going to meetings. The pope called Nazism a “sinister regime” that “banished God,” becoming “impervious to anything good and true.”

“I think he didn’t want to miss the opportunity to show what can happen when faith and individual responsibility are neglected,” said Archbishop O’Brien.

The pope is challenging young people to stand up to the evils that exist in the world today, the archbishop said.

“He’s talking about relativism and the immediate gratification so many people are looking for,” said Archbishop O’Brien. “He wanted to let them know he’s aware of that and encourage them to stay on track.”

Archbishop O’Brien said it was a joy to see so many people from the Baltimore archdiocese at the various papal events. There was a palpable sense of excitement throughout the week, he said.

Archbishop O’Brien was particularly touched at the Mass at Yankee Stadium when the crowd interrupted the pope’s homily twice – once when he spoke on the need for religious vocations and again when he spoke up for the sanctity of life.

“I think those are the two areas where they wanted to be encouraged,” said Archbishop O’Brien.

The archbishop said the pope leaves America with a rich body of ideas to study.

“It’s very important that we as Catholics really ponder and study his words,” he said. “He said so much.”