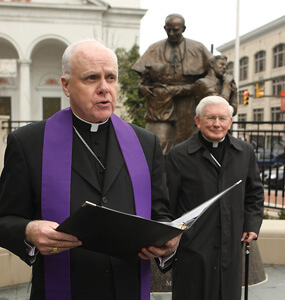 Wearing a purple stole and standing beside Cardinal William H. Keeler, the archbishop sprinkled holy water on the wreath and prayed that the late pope is resting in peace.

In an interview with The Catholic Review following the brief ceremony, Archbishop O’Brien said he met the late pope “a couple of dozen times” and always found him to be “very personable.”

“He took a great interest not only in people, but in what they were doing and why they were in Rome,” Archbishop O’Brien said. “He was very person-centered and I think that was his theology too, with respect for every human being.”

Archbishop O’Brien said he is praying for the canonization of Pope John Paul II, whose sainthood cause is now under consideration in Rome.